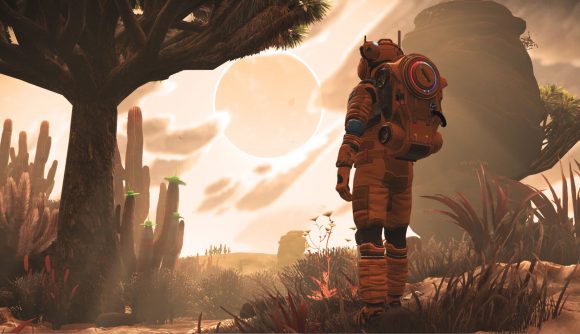 No Man’s Sky now has a seriously dedicated community which has stuck with the game over the course of a multitude of updates, and all that new content has had people staying in the game for much longer than before. The average hour count for a No Man’s Sky player has nearly doubled since launch, and the reasons why are informing updates like Beyond.

“It was a very polarised launch,” director Sean Murray tells us, “but around 25 hours was what a person played, if they came in on average. It’s kind of a hard one to wrap your head around. For every person who comes in and plays your game for like an hour, you’ve got people who are playing for 50 hours or whatever.

“We tended to skew very high with some people. They played it like it was their forever game, for hundreds of hours. That became a metric that we started to really care about. Not that we want people to be playing our game for ages, but we don’t have very many classic, traditional gameplay loops in the game that entice people along. They are playing it because they enjoy it, they want to see the next planet or whatever it is.”

Murray says that this playtime metric is “something that really motivates us” while building updates. Now, “the person who’s buying the game, buying NEXT, generally plays the game for about 45 hours on average. Which is a really high number in terms of an average. There are very few games that I play in a year that are played for like 40 or 50 hours, so we’re happy with that.”

While exploration is the heart of No Man’s Sky, Murray says players have really taken to base-building – in fact, it’s “the second biggest thing that people spend their time doing.” In turn, all the construction has fed back into motivating other players to explore – but Hello Games “didn’t predict” that.

“You get this neat thing where people land on planets, and what they’re really hoping for is, has somebody been here before and has somebody built something?”

Murray says “we go through what people have uploaded thinking, ‘What was going on in your mind? Why did you put this here?’ It’s like finding some sort of relic, like ‘What does this mean?’ And you find some weird weird things out there. I try to picture the person thinking.’ Yeah, I’ll just build a taco stand.’”