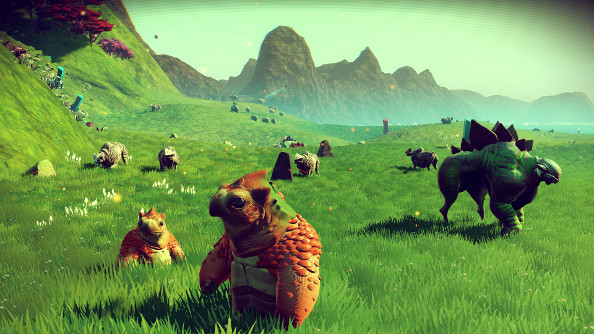 With a post today on the Playstation Blog, Hello Games bossman Sean Murray has confirmed that, as reported by Kotaku earlier this week, No Man’s Sky has been delayed. It will now launch six weeks later at the beginning of August. Due to retail release schedules still having affect, the dates are August 9 in the US, August 10 in most of Europe and August 12 in the United Kingdom.

No matter the wait, we’ll have the best space games ready for you at all times.

The six week delay comes from, as Murray puts it, a realisation that “some key moments needed extra polish to bring them up to our standards. I have had to make the tough choice to delay the game for a few weeks to allow us to deliver something special.

“We’re prepared to make the tough choices to get it right,” he explains, also saying that “This is a type of game that hasn’t been attempted before, by a smaller team than anyone would expect, under an intense amount of expectation.”

Murray also praises the development team, saying things are going extraoridinarily well considering the task they’ve set, and that everyone is doing a great job. As he puts it, “we get one shot to make this game and we can’t mess it up.” It’s a fair point, particularly with the whirlwind of hype and possible disappointment that’s swirled around the game for the past couple of years. This is the game’s first actual delay, as June 21 was its first proper release date, but it feels as if we’ve been waiting for it forever. Thankfully, in the best year of games we’ve ever seen, we’ll have plenty to play while we wait.

Read the full statement on the Playstation blog, and strap in for August.

Original story May 26, 2016:A long strange trip would be the best way of describing No Man’s Sky’s various trials and tribulations on the way to release. Initially one of the most hyped games in the world, it has slowly dropped in public perception as understanding of what you do in the game – possibly not a whole lot – has deepened. With release on the horizon, currently officially June 21, it was an exciting prospect to see what the final version is like. Now, however, it’s looking like we might have to wait a bit longer.

Sources, cited by Kotaku, say that No Man’s Sky has been delayed, though no precise date was given beyond a July/August window. Kotaku describe one source as ‘reliable’ though don’t name their connection to the project, while another is a GameStop employee. The latter says that their store recently received point of sale marketing materials – that’s the cardboard signs you see everywhere in retail outlets – with the old release date on them. However, they were told to cover them up with “coming soon” stickers, as seen here: 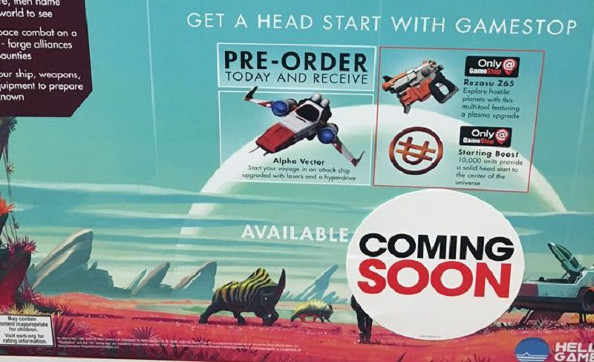 As far as Sony and Hello Games go, they’re currently not responding to requests for comment by us or Kotaku. Chances are, assuming this is true, an announcement is scheduled for some time before E3 as leaving it for the conference on Monday June 13 would be cutting it a little fine.

Perhaps more interesting would be the reasons for delay. It is almost certainly the biggest game coming out next month, unless you happen to be a particularly keen fan of Mirror’s Edge, so it’s unlikely to be a case of trying to get out of the way of other games that could overshadow it. A couple of months isn’t enough to make significant design changes, but it can clear bugs out of a game of this scale quite effectively, so perhaps it’s that. With No Man’s Sky’s long run-up to release, it can’t afford a problematic launch.

We’ll bring you more as it happens or if we receive responses to our requests for comment. What is your feeling on No Man’s Sky, all this time departed from that amazing reveal trailer?