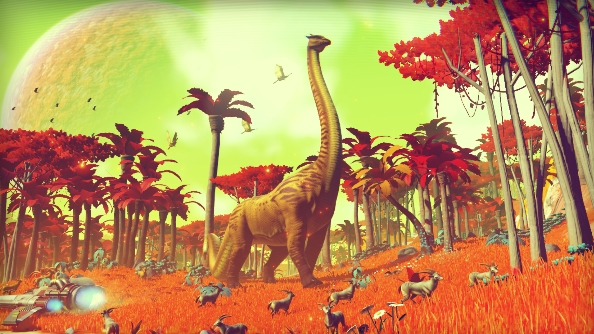 Update August 27, 2016: The user who first alleged his named No Man’s Sky fauna and flora discoveries had been reset after just two weeks has found his taxonomical records safe and sound.

Don’t like playing by the rules? Check out the best No Man’s Sky mods here.

The species from Reddit user Dark_nexis’s starting planet did not match the names he had given them after first discovering each at the beginning of his playthrough. But after re-downloading and reloading the game all his stellar nomenclature choices,such as Knucklehead, Crab Mauler and Large Crab Mauler,have returned. Thank science we’ve not lost these important findings.

Original story: When it comes to breaking promises, naysayers would say No Man’s Sky is now reaching Peter Molyneux levels of hype followed by ultimate disappointment. The latest ‘scandal’ to hit the game is the suggestion that player discoveries are being wiped from existence.

This is all according to a growing number of reports on Reddit, all sparked by one user who claimed to have returned to his starting planet only to discover the plants and animals he had uncovered at the start of play now no longer existed.

“I finally made it back after many hours and I found out all my discoveries were wiped,” offered user Dark_Nexis on Reddit. “I check a few neighboring stars I discovered and their discovers were wiped. So none of my named animals plants were ever saved.”

Said user claims No Man’s Sky remembers names he gave to systems and planets, but everything else he branded has been wiped. If this sounds like a one off, the flow of replies backing him up would suggest there’s enough evidence to point to this being a widescale problem.

“The more systems and planets I discover (or animals and plants, not sure what causes this) older animals, plants and checkpoints appear to be overridden or something,” replied Ultrasilvanus. “Discoveries are being erased in chronological order. First system, second system and so on. It’s not random. It’s a pattern, starting from your very first discoveries.”

The suggestion is users appear to have a limited number of plant and animal discoveries that No Man’s Sky will remember. Once you reach your limit – which is unknown as things stand – your first discoveries start being deleted.

Whether this is intentional or the result of an error is currently unknown, though naturally players affected are now reluctant to make any further discoveries as they play, lest they lose some important ones they made early on.