No Man’s Sky has ground vehicles now – some with wheels, one that hovers, all of them cute sci-fi cars that look like something you might find in a box of toys. They serve a practical purpose, making exploration faster and easier, but what about when you’re off the clock? When you’ve had your fill of gathering resources and charting alien worlds? That’s what race tracks are for.

Racing is probably the most unexpected of Hello Games’ new additions to its hard-to-pin-down space adventure. This is, after all, a mostly single-player game where even NPCs are few and far between, especially on the surface of a planet. The absence of other people is a bit of an obstacle when it comes to races, and it’s not the only one.

Before you can start scooting around in your very own futuristic Silverstone, you’ve got to actually build the track. In normal, survival, and permadeath modes that means you’ll need an exo vehicle station, a specialist to operate it, and the resources required to craft the race initiator pad along with any walls, obstacles, and decorations that you might add later. In creative mode everything is free, so you can get started straight away. 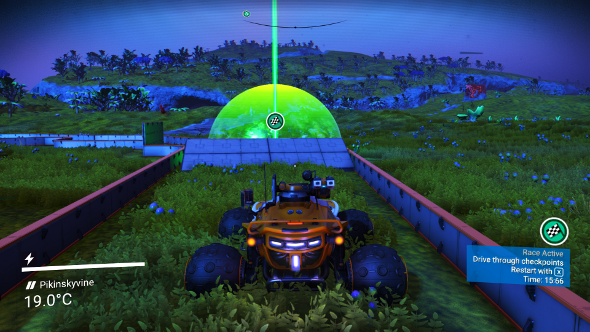 The most basic track is just a series of checkpoints, and the process for plonking them down is elegantly simple. You just need to activate the race pad and then drive around in your vehicle, placing checkpoints as you go. You’re essentially experiencing the track as you develop it, and it’s an unexpectedly organic way to build a course. Once you park your vehicle back on the pad, that’s the track finished.

Of course, a bunch of glowing checkpoints doesn’t make for the most thrilling race, and would be better suited, perhaps, to a sprint across the stars. The planet’s geography and flora, however, can create obstacles like huge ravines that need to be jumped over or forests that must be navigated, but they don’t create as reliable a challenge as something made by your own digital paws. Not to worry! There’s a hefty suite of tools that can turn a string of checkpoints into something a bit more fancy, though not without a few annoying caveats. 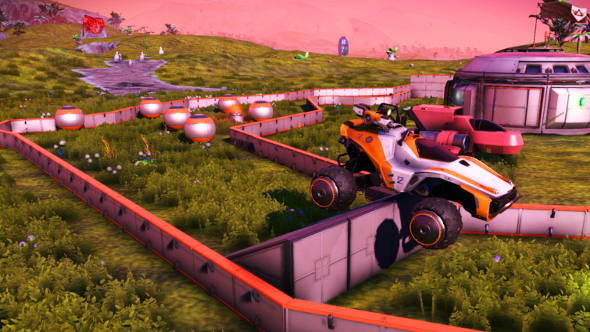 See, No Man’s Sky’s building tools, while reasonably flexible, have one major limitation: they are trapped within an invisible circle that surrounds your base. They are, essentially, in a sci-fi prison for walls and lights and ramps that have committed terrible space crimes. It’s especially strange because checkpoints can be placed outside of the base boundary, along with exo vehicle pads and a few other items. But not building parts.

It feels like a lack of foresight, echoed by the fact that there isn’t a discrete parts list for race tracks. Ramps, walls, and obstacles all must be plucked from the base building menu, which sometimes makes it feel a bit like hammering a square peg into a round hole. The first-person view doesn’t make things any easier. It’s not a problem when you’re constructing buildings, but tracks require a level of precision and fine-tuning that just isn’t possible when you’re stuck with such a limited view.

My track went through countless redesigns that could have been avoided if I’d been able to see what I was doing. One of the big issues is trying to parse the scale of it when you can only gawk at a tiny section. There’s is a workaround, though not a great one. Switch to photo mode and you can zoom out and get a pretty good view of the track. You can’t build in this mode, however, so it’s of limited use. 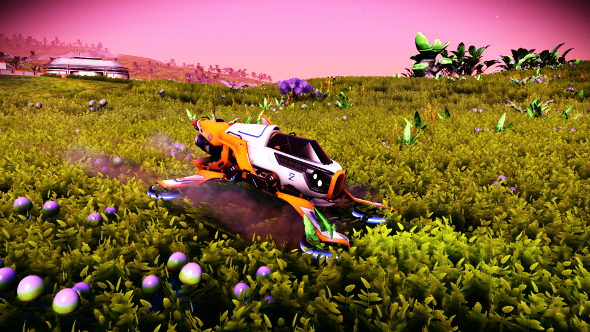 It’s fiddly, then, and if you want a proper track you’re going to have to settle for a small one, but that doesn’t mean you can’t make it interesting. Objects you previously used exclusively for building your flashy home or lab are surprisingly effective when it comes to putting together elaborate vehicular obstacle courses. I’d love some parts created just for race tracks, though, even if they are purely cosmetic, but what’s available more than does the job.

With my track complete, I felt pretty pleased with myself. Sure, it took a lot longer to make than expected, and it made my previously sterile base resemble a haphazard go-kart course that definitely wouldn’t pass any safety inspections, but I still felt proud of my wonky creation. That satisfaction diminished after I put it through its paces.

No Man’s Sky’s vehicles are not go-karts. They are exploration vehicles that can handle just about any terrain. They’re pretty fast, too, making short work of my tiny course. They are designed for the geography outside of the base area, where it’s not possible to build. Ultimately, that leaves two unsatisfying options: make a small track that isn’t suited for these vehicles, or forgo creativity and chuck some checkpoints down where the terrain is more varied. 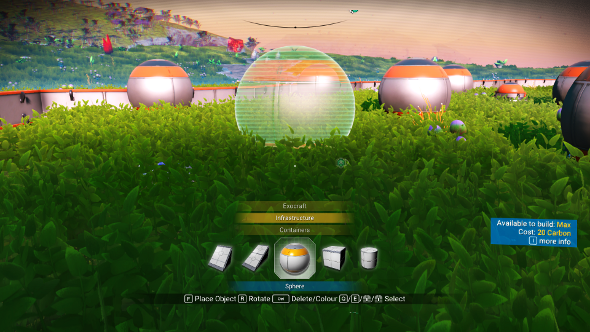 And here’s the rub: no matter how amazing your track is, you’re probably going to use it once and forget about it. There’s no actual racing going on. If you’re lucky, someone might happen across your base and attempt to beat your best time, or maybe you’ll give someone the coordinates and talk them into visiting. But even then, both of you will just be fighting the clock. It’s less Fast and Furious and more Vin Diesel popping down to the shops in his Tesla. This weird, awkward juxtaposition of multiplayer concepts in what is almost entirely a single-player game once again bites No Man’s Sky on the arse.

While I might seem dismissive of it, like most of what’s in both the Path Finder and Foundation updates, the race track feature makes the galaxy a more engaging place. And it has almost all it needs to be a great deal of fun. The tools are all there, they just need to be unshackled. I don’t think the most important missing element is something Hello Games are interested in adding, though. For whatever reason, the studio’s vision of No Man’s Sky is one where you play alone, and racing is never going to be anything more than a one-time novelty without friends.