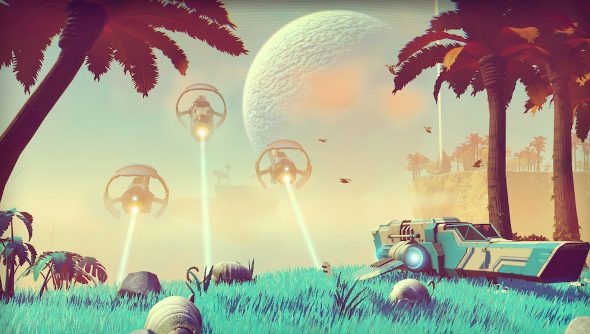 Skyrim is big. Grand Theft Auto V is big. Dragon Age Inquisition is big. No Man’s Sky is cosmically vast. It’s so huge, that it might as well be infinite given our fleeting, mortal lives.

Hello Games co-founder Sean Murray told IGN that the team started with a 32 bit number, which meant that it would take explorers around four or five thousand years to visit every planet – and that’s only if they spent a second on each world.

That wasn’t big enough for them, though.

Perhaps Hello Games subscribe to the theory that we are now witnessing the generation who will live indefinitely. So maybe, probably not, but maybe someone might just be able to visit all of those worlds.

Bugger that, they presumably said while staring out at the night sky. So they decided to use a 64 bit number to create their procedural universes.

Murray said that it would take a player around five billion years to explore the universe, again only spending a second on each planet. If, somehow, someone was planning on living for that length of time, and only playing No Man’s Sky, pissing, shiting and eating at their desk, the sun would die out before they could finish.

The scale is technically impressive, if somewhat unnecessary. And it ensures that obsessive completionists will find their nemesis.

Hopefully the PS4 exclusive deal will run out before the death of the sun.