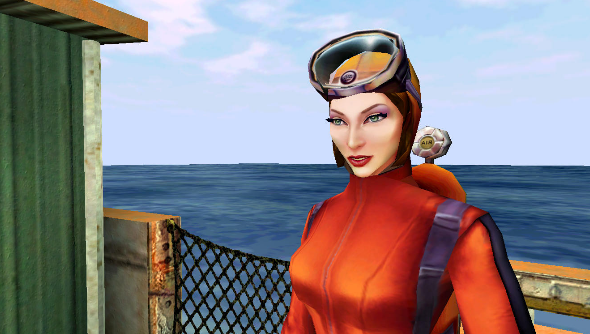 No matter how beloved the game, if you start to run your fingers across its surface you’ll soon start to feel the lumps, bumps, cracks, and imperfections that come with tight deadlines, over-worked design teams, and coding nightmares. The dawn of the new millenium was full of games with great ideas but fractured execution, and Monolith’s No One Lives Forever is living proof of the period.

A brave, camp spy comedy FPS, No One Lives Forever’s brilliance was occasionally let down by naff stealth elements, and full of loose threads like mechanics that led nowhere, and redundant weapons. Some of the unknown reasons behind these oddities have now been revealed in an interview with the game’s lead designer Craig Hubbard.

Talking to journalist Joe Martin, Hubbard discussed the frequently criticised stealth missions that followed the classic 2000’s ruleset of failing missions upon detection. “The mandatory sneaking sequences needed to be balanced better,” he said. “I do regret that it was impossible to return to sneaking once you’d been spotted…”[Those sequences] were meant to be tense, not frustrating…but we didn’t have a playtest lab in those days.”

Hubbard wishes that playtesting was a bigger part of Monolith, but instead the studio’s approach was to spend all its time on asset creation, including them in the game regardless of if they added or detracted from the experience. This led to a game weighed down by a massive amount of content, some of it brilliant, some of it less so.

A notable weapon in No One Lives Forever was the robot poodle, a gadget that distracted guard dogs. Yet dogs were almost entirely absent from the game, appearing in just a few isolated areas, and always locked away in cages (and thus harmless). Why would you need the distraction robot poodle then? “We originally intended to have guard dogs in the game… But quadrupeds are tricky from an animation and movement perspective. We had too much other stuff on our plates.” Static dogs in cages solved the animation problems, but the lack of testing meant that the robot poodle was never cut from the game, despite being useless.

Similarly, a Reputation Bonus stat would be granted through the game when the player acted nice in conversations, but the stat never amounted to anything obvious. “It was supposed to effect how certain conversations would play out,” explained Hubbard. “it was a partially implemented feature that neither got finished or removed.”

There are more insightful looks into No One Lives Forever’s fractured DNA over at Joe Martin’s Deleted Scenes feature.