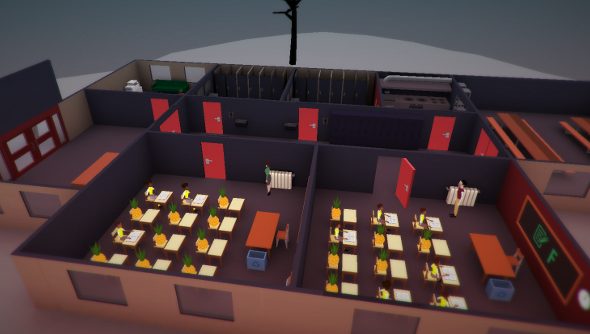 Kids are difficult. They’re loud and hyperactive until they hit their teens and then they’re moody and spotty. Wouldn’t it be great if an evil wizard just transformed them all into pineapples? Good news! He did exactly that.

In No Pineapple Left Behind, you manage a series of schools where most of your classes will be full of barely sentient fruit who exist solely to take tests and earn the school lots of lovely funding.

This peculiar school simulator is the brainchild of Seth Alter, teacher turned developer. Like his previous game, economic digital board game Neocolonialism, No Pineapple Left Behind is as much a condemnation of the status quo as it is a game. 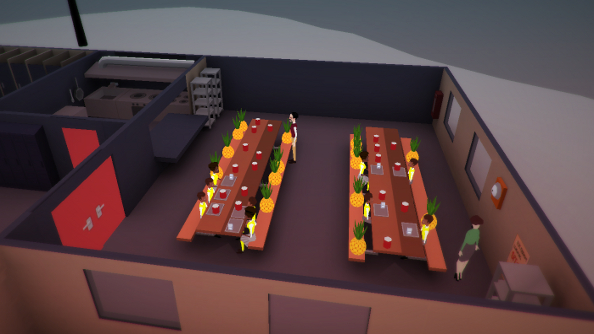 Alter left his teaching job because he wasn’t willing to treat children like dehumanised testing machines, mere statistics, and No Pineapple Left Behind was inspired by his experiences in the American school system, particularly when it came to standardised testing.

It all sounds quite serious, doesn’t it? And the subject matter is. Critics of the No Child Left Behind Act believe that it treats teachers as disposable, puts too much pressure on schools and ultimately doesn’t serve the best interest of the kids.

No Pineapple Left Behind alleviates the gloom with pineapples, magic and school buses that travel through time and space using quantum gates, but the critique of the American school system seeps into every aspect of the game. 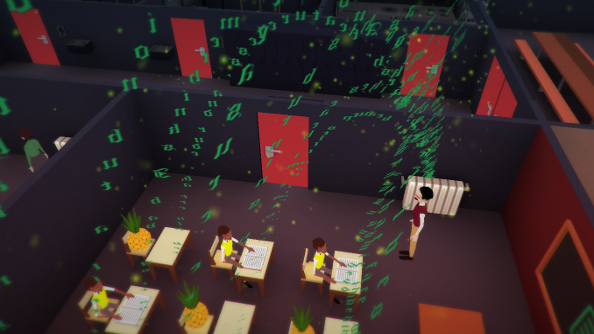 Your primary goal in each mission, set in separate schools, is to not go bankrupt. Make money and keep the lights on – that’s the focus. And the easiest way to do that is by having a school filled with pineapples. They don’t have emotions, relationships or mood swings; they just take tests. Keep the test scores up, and you’ll keep being funded by the government.

Teachers use spells to fill their students with the random assortment of knowledge they’ll need for their tests, and by spending experience, new spells can be unlocked that are even more effective at shoving information inside whatever passes for a pineapple’s brain. It’s easy to teach the fruit, because they are never distracted, but if they turn back into children, things get significantly more complicated.

Children have the potential to get better grades than pineapples, but they are also laden with traits and relationships that reduce their grades. If they have friends, each friend lowers their grades, as does being late for class, being bullied and pining after a classmate. They are social, distracted and harder to teach. 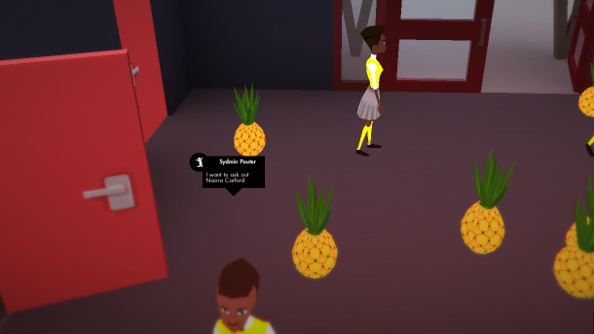 No Pineapple Left behind is ultimately sympathetic toward the teachers and principles that work within the system. The implication is that it’s very easy, in the face of stress and lost funding, to take the easier route and treat kids like numbers, like pineapples.

As well as spells used to educate, teachers also have lasers that, essentially, strip children of their humanity. Their personal goals, relationships and quirks can be removed, reducing them to another statistic. I’m not sure if making it a laser makes it more whimsical or even more ominous. It conjures up visions of lobotomies and behaviour normalisation, vulnerable people being taken advantage of.

Stress just gets piled on throughout the game. Bus strikes, demands from the school board, parental complaints, dropping grades, dwindling funding, the looming threat of bankruptcy – all this bubbles away underneath the wacky presentation. 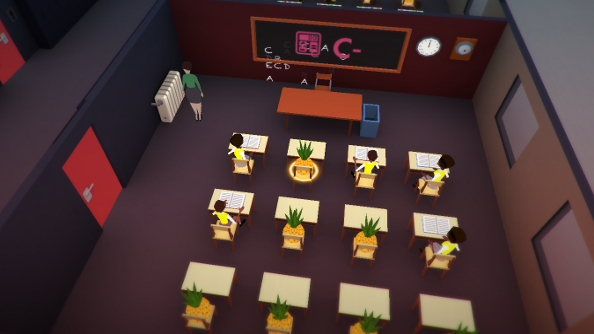 Teachers are broken down, just like kids, but into disposable employees rather than fruit. Right next to their salary is the button you can press to fire them. And the thing that’s most likely to inspire you to sack a teacher is their stress level. If they’re stressed, then their performance suffers. You can just get rid of them and buy a newer, lower maintenance model. A new teacher might be pricier, though, so maybe you’ll just keep the stressed teacher around, ignoring the impact that has on their classes.

It seems like every decision you have to make is a fairly horrible one, putting someone or the future of the school at risk.

I think it’s going to be a challenge for Alter to make a critique of such an esoteric subject fun to play through. At the moment it’s interesting and clever, but actually managing these schools bounces between being a bit stressful and being a bit dull, while you wait for time to pass until another crisis crops up. It’s only in alpha, however, and the premise is already proving to be extremely compelling.

You can take the first two missions for a spin yourself by downloading the alpha build here. It’s a pay what you want alpha with two levels, but if you do support the developer by throwing some cash his way, know that this won’t net you the finished game at launch.