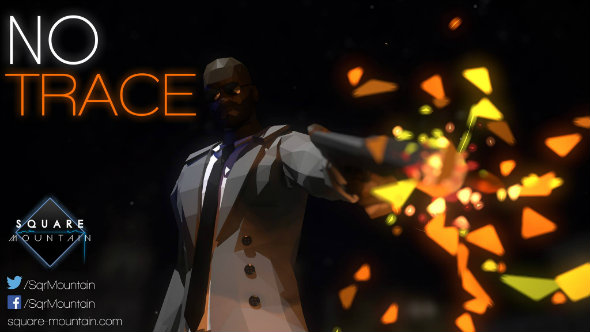 No Trace looks like a top-down Hitman, but fortunately its low poly aesthetic takes the shine right out of the protagonist’s bald head. Listen right, you have to be bald if your job is murdering people for money – you gotta dress for success.

Here’s a bunch of the best indie games on PC, if you’re looking for this kind of thing.

“No Trace is a modern, indie take on the classic hardcore stealth genre, focusing on assassination, infiltration and espionage style gameplay,” says the offciial site. “Inspired by stealth action games such as Hitman, Syndicate and Volume as well as actions games such as Hotline Miami.

“No Trace will immerse you in highly detailed stylised environments full of creative and deadly opportunities to complete your objectives. It offers you a tailored experience, allowing you to play the game how you want encouraging you to use a mixture of stealth and combat.”

So it’s a top-down Hitman, but it morphs a low-poly Hotline Miami when things go sideways. Doesn’t that just sound grand? It looks grand, too. Here’s a trailer

The trailer shows glimpses of all the creativity of a Hitman hit – planning your attack, slipping past guards, stuffing people into bins – but when it all kicks off it looks just satisfying, choosing to empower the player instead of flooring them in a hail of lead in an instant.