Nom Nom Galaxy is a game preoccupied with soup. Thick broths made out of sentient tomatoes, cream of flying squid – the aliens of Pixel Junk’s strategy platformer are loopy for these liquid feasts.

I’ve become preoccupied with soup, too. For the last week, I’ve been bouncing around alien worlds, killing monsters and hunting down rare ingredients to tickle the taste buds of the most discerning of soup boffins, all the while maintaining a constantly expanding series of factories, churning out the hearty elixirs that fuel the galaxy.

So much responsibility! Feeding soup aficionados might not seem like important work, but Nom Nom Galaxy’s denizens take it very seriously. Corporate wars are waged over the stuff. This is a galaxy where Campbell’s would need a private army and a lot of robots to remain competitive. 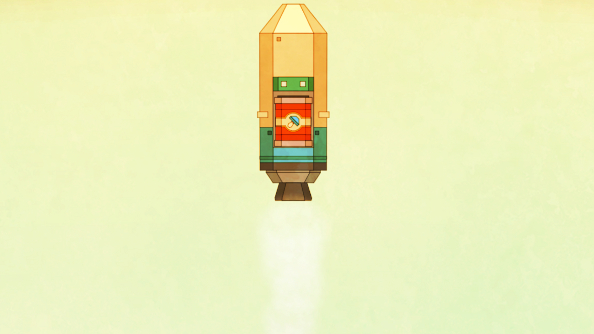 The newest soup mega-corp is SoupCo, and you’re the company’s newest Astroworker, tasked with visiting the galaxy’s many ingredient-rich worlds and conquering them (with your market share) one by one.

Starbound is Nom Nom Galaxy’s closest relative. Both games are concerned with exploring alien worlds, their surfaces and their depths, and will see you cutting your way through mountains and deep underground. The two diverge significantly when it comes to the way that Q-Games and Chucklefish designed their games’ respective sandboxes, however.

Where Starbound puts you in the boots of a free-wheeling adventurer, travelling through space at your own pace, mostly making your own objectives, Nom Nom Galaxy’s sandbox is more directed. Each world is a level, and you only carry over the upgrades you unlocked by completing previous levels. 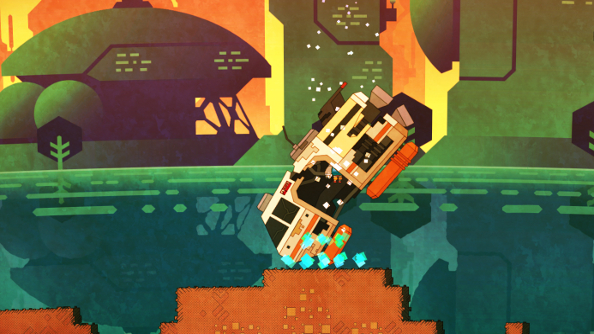 Every level is a micro-sandbox, where you split time between searching for ingredients and managing your factory. While you can approach each level however you fancy, it’s a competition, and one that you can lose. You’re not alone, you see. You’ll be competing with rival companies in a race to get a 100 percent market share by fattening everyone up with your delicious soup. These competitors are, lamentably, mostly invisible. They send UFOs to assault your factory in a very simple tower defense mini-game, but otherwise their presense is only really felt when you look at the market share meter.

There’s no time to waste dilly-dallying, constructing fancy castles or steampunk spaceships – everything you construct will serve a purpose. You’re not being paid the big bucks to muck around.

Soup-ferrying rockets and massive blenders, simply called Soup Machines, are the most important things you’ll be building. Bring back two ingredients from a foraging trip, stick ‘em in the blender, and you’ve got yourself a new type of soup. A tin will eventually pop out, which you can shove inside a rocket and then sell it to the hungry galaxy. 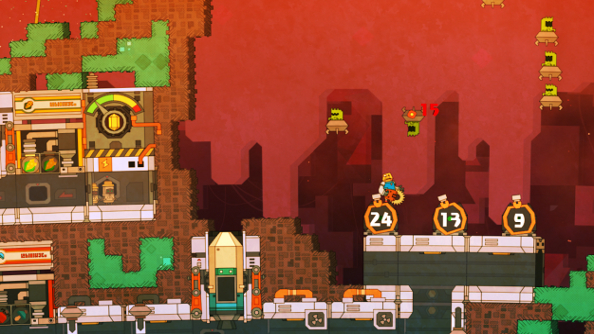 At the start of a level, your operation will be small and easy to manage manually, but as the competition heats up, you’ll need more and more blenders and rockets, and space becomes a serious concern. Thankfully, you can build underground and up into the sky, with grav tubes sending you and your ingredients up and down and all over your increasingly elaborate facility.

Plonking down the various components of your factory is easy, even if making it efficient and navigating areas where there’s a lot of impenetrable rock can pose a challenge. The factory will inevitably get so large that you’ll need to automate, giving you more time to search further afield for extra-rare morsels for your soup.

A variety of robots can be purchased to keep your factory ticking while you’re in the wilderness. Wee robots can carry soup and ingredients, harvest resources and even plant things so that you won’t run out. Others can fling them up and down the grav tubes, making sure that the factory never grinds to a halt. 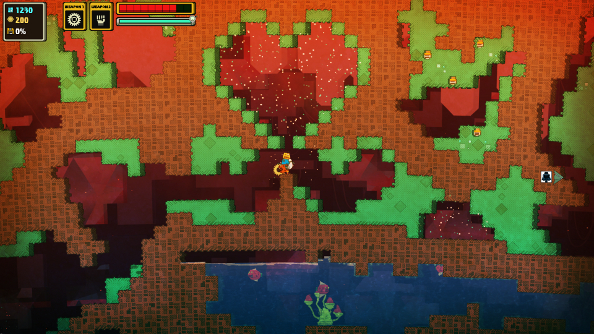 Unfortunately, these automatons have no intelligence. Take the wee fellas that pick up tins and resources, bringing them to where they need to be, who you unlock right at the start. They’re rubbish. If you toss them a can of soup and there’s a rocket waiting for it just behind them, they won’t realise that. They’ll keep on marching in the direction they’ve been assigned, and won’t notice a waiting rocket until they are right next to it. So you’ll need to go up to them and change their direction.

Even when I had all these conveyer belts and an army of robots, I always felt like time was being wasted. More often than not, I’d see some bots carrying a mushroom or a chunk of aggressive fruit monster to its destination at this agonisingly slow pace, punch them, grab the resource myself and deposit it in half the time.

I think I’m probably just a very demanding boss, because it does still keep the manufacturing chain moving along, even if it is at a glacial pace. And there’s something overwhelmingly satisfying about watching all this work going on in your gloriously complicated, maze-like factory. 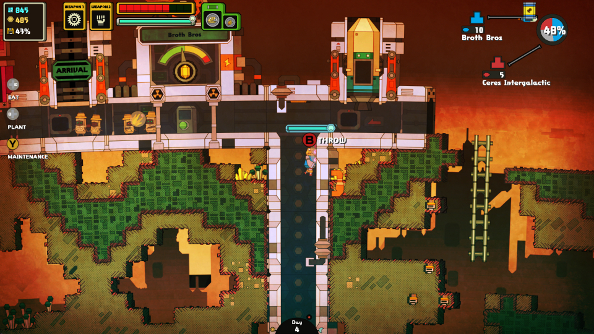 When not overseeing the factory, you’ll be scouting planets for resources. With your trusty buzzsaw, you can carve paths through the earth, plunging into the depths of a world to harvest plants, hostile beasties and the occasional big, grumpy boss monster. Each world has a plethora of hazards, usually in the form of the creatures you’re hunting, which you can use your buzzsaw, fists or the occasional weapon to kill, but you’ll spend most of your time exploring. It’s for the best, because combat really isn’t very engaging. You run up to enemies and punch them lots. Just hammer that button and think of soup.

Nom Nom Galaxy’s worlds are colourful, blocky affairs that are easy on the eyes and easy to navigate. It’s a doddle, making your own paths with the buzzsaw, and you’re never going to get stuck. Fallen down a massive hole and somehow survived? No bother. You can dig through the wall and then carve out a staircase or simply plonk down some ladders. And because health and safety is paramount in a modern business, you’ll probably want to build a bridge across the gap when you get back up. Using my Xbox 360 controller, which is a lot more effective than mouse and keyboard, I did notice that inputs were sometimes not recognised, and overall the controls lack the precision associated with dedicated platformers. I never found myself stuck, though, or dying too frequently because of sluggish controls.

When outside, you’re at the mercy of your oxygen tank, and when that runs out, you slowly start to die. It’s at that point where you’ll need to make a decision: do you end your excursion and bolt back to base, or do you march forward, hoping you’ll find one of the oxygen pockets that pepper the underground network of caves. You’re unlikely to be outside for too long, though. You can only carry a small number of ingredients (though that number does grow and you can even unlock harvesting vehicles), sending you back to base frequently. 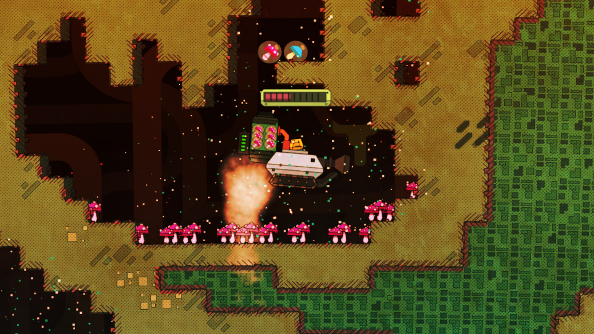 Nom Nom Galaxy rarely keeps you doing one thing for very long, and Astroworkers wear a lot of different hats. One moment you’ll be a platforming explorer, but a few minutes later you’re solving problems in the manufacturing chain or defending the base from an attack from a jealous competitor.

While the main campaign does throw different objectives and limitations at you, there’s a lot of repetition. One level might pit you against exceptionally picky customers or task you with collecting specific resources, but in the end, you’re still doing the same thing from planet to planet. Yet the gameplay loop mixes things up and keeps you on your toes to such a degree that the repetition is well-disguised. It might sometimes feel like a second job, but it’s never a chore.

Unlocking new abilities, robots and parts for your factory through the campaign also ensures that Nom Nom Galaxy avoids getting stale. The broad strokes remain the same, but as your toy box expands, it simply becomes more fun. Things that were once laborious become simple, and the more tools you have, the more gargantuan you can make your factories. 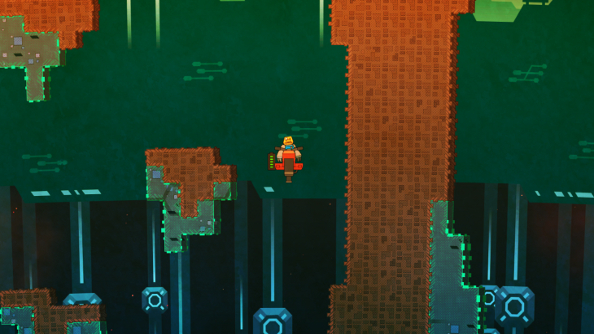 Completed worlds can be replayed in a pure sandbox mode, without pesky enemy corporations, and you can team up with three chums to conquer the soup market together in co-op. There are also weekly challenges that will task you with doing things outside of your normal managerial remit, like pogo stick races or big game hunting. Even Astroworkers need a break, and the galaxy offers up plenty of diversions.

None of the separate parts – the platforming, the construction, the light strategy – stand out as particularly refined or able to stand toe to toe with games that just focus on one of those things, but Q-Games has put them all together in a package that is much more than the sum of its parts, hiding its flaws under the satisfying pace and multitude of unlockable rewards and newly discovered recipes. With every completed level, the call of the soup drove me forward, onto the next planet, seeking greater profits and fat customers.