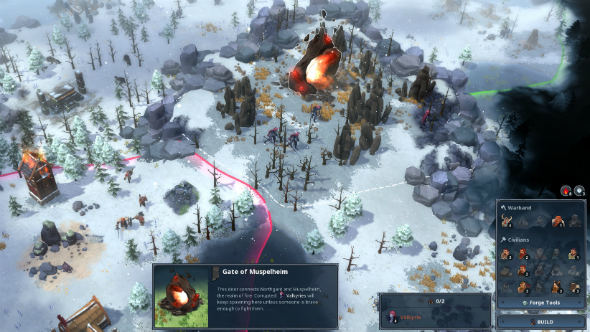 It’s three in the morning and I’m still playing Northgard. I had long since claimed a Wisdom victory for my clan but now I am determined to turn conquer the entire map, build my army and ensure my people never endure another winter like their first, which killed off half the camp. I might be the victor in this particular game, but Northgard is remarkably adept at punishing complacency.

It’s four in the morning now, and after an hour of aggressive expansion I’ve been brought to my knees, crippled by another particularly cold winter and an incursion from the east that had wrested control of my woodcutter’s lodges. With no stockpile of wood to make new buildings my only possible hope was to retake my territories, but with half of my camp yet again facing a slow and painful death to sickness that seemed an unlikely conquest.

It’s half past four in the morning and I’ve just started a new game.

For more tactics and scheming, check out the best strategy games on PC.

Even in its Early Access state, Northgard is a compelling and sturdy RTS about leading your fledgling clan of Norsemen from humble beginnings to prosperity and security. There are victory conditions too, but the main focus is on attaining some semblance of sustainability and expanding your territories. To keep your township well supplied you’ll need to build plenty of infrastructure: housing, woodcutter’s lodges, scout camps, trading posts and mines at the very least. But you’ll also have to keep them happy in order to keep growing and for that you’ll need breweries, building upgrades, steady conquest, occasional feasts and space to live. 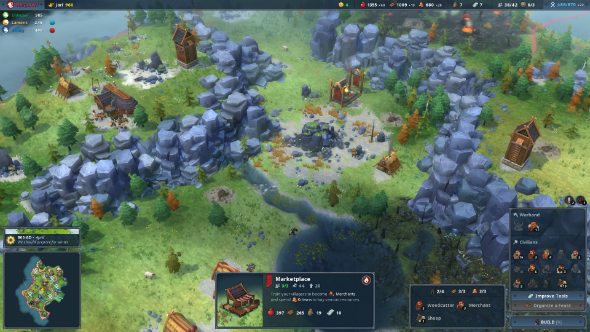 It sounds like a simple trade-off – produce enough resources to keep things ticking over and invest any surplus in luxuries and military growth – but it’s not. Northgard forces you to agonise over every action you take by carving its procedurally generated maps up into large tiles that each have a key resource (or two) and a limit to how many buildings can be placed there. In a turn-based strategy game that might make matters taxing, but it’s positively sweat-inducing in an RTS game, where pausing the action is not an option and attaining maximum efficiency is the only means of winning.

On your starting tile you’ll have five building slots, which you might use to place a woodcutter’s lodge, a couple of houses, a scout camp and a training camp. That might suffice for the first few minutes of a game, but seeing as your town hall spits out a new villager every 30 seconds or so, not only will you use more resources, you’ll also need more housing and living space to keep them happy. Meeting those demands only as they become problematic is no way to rule your people. To win a game of Northgard you have to always be three or four actions ahead of the game.

For example, say I’ve just opened up a tile with three building slots and a plot of fertile land that would be perfect for building a farm, but I also desperately need a brewery to keep my people happy and another trading post to pay for housing upgrades – firstly because certain villagers are demanding it, and also upgrading homes will temporarily solve my clan’s housing shortages. If I build all of that I won’t have a spare slot for a silo to safely store the farm’s produce, or a defense tower to keep the tile safe, or a training camp to increase the size of my army, or a woodcutter’s lodge to keep up with the growing demand for wood. And if I spend too much thinking about any of that then the housing crisis will have gotten so bad I’ll have to use one of those slots for a house. 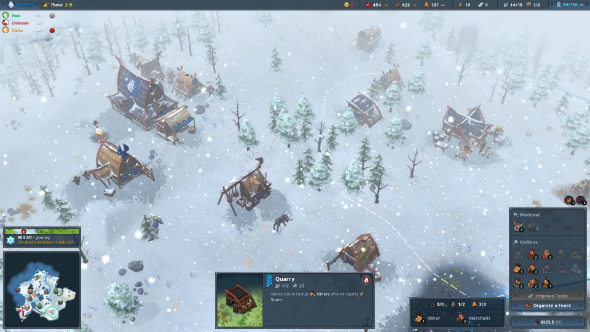 One important mechanic that ties nicely into the game’s Norse setting is the importance of preparing for winter. In Northgard, winter severely impacts your how your clan operates: you’ll need more firewood to warm your buildings, your people will eat more, but struggle to harvest food in the snow, and your warriors will be less effective outside of your borders. To make matters worse Northgard will occasionally throw out natural disasters for your clan to overcome, like an extreme blizzard that amplifies the woes of winter to potentially devastating effect, or portals to Helheim that spawn hordes of Draugr directly into your lands. Most of the time these challenges are easily overcome, but failing to keep on top of just one can be detrimental to your entire clan.

Refreshingly, Northgard isn’t just keeping on top of things. For instance, you don’t have to micromanage your villagers at all – once you’ve assigned them to a specialist building like a trading post they’ll automatically become a merchant and fulfill that role indefinitely. Moving villagers about is as simple as clicking on them and sending them over to a new building, which makes it easy to drastically change what and how much of each resource you want your village to produce. Just as you have to think carefully about what to build, you also have to pore over how many people are assigned to each role – an offshoot of that conundrum is that losing half of your village means losing half of your workforce.

Of course you’re not the only living beings vying for control of the map, you’ll also have up to three AI clans seeking victory by any means necessary, as well as an assortment of wild beasts and creatures from Norse mythology to either slay or guard against. Defending your lands in Northgard is exceptionally difficult because of how many points of entry the enemy has, and as you approach the mid-game it becomes your main concern, forcing you to hastily construct defensive towers and training grounds to shore up your lands. 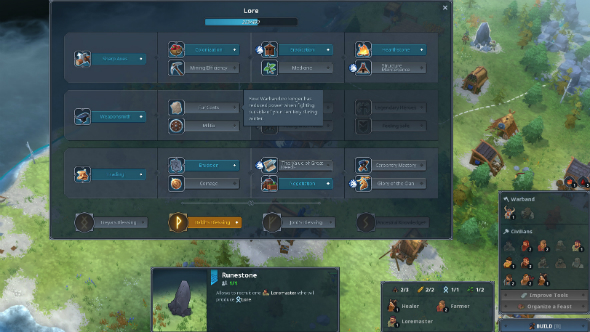 This all ties into the expansionist element of Northgard, as the only means of winning the game is to venture out into the big wide world, whether that’s in the name of lore, fame or total domination. These are the most reliable means of achieving a victory over your foe, however, each map also comes loaded with a few unique tiles that offer a more straightforward path to victory. One example of this are the Jötunn, a camp of giants that you can discover and trade food with. Trade enough food and they’ll loan you their finest warchief, allowing you to wipe out every enemy on the map with ease. You might find a lava field instead, which you can build a forge on and use to craft Odin’s sword for another type of victory. Other more RNG-reliant victory objectives involve either colonising a portal to Muspelheim and securing it for a year, or taking control of the sacred World Tree, Yggdrasil.

These add to your options, but also provide your rivals with plenty of quick routes to victory. So much so that sometimes the game ends abruptly, just as you’re finding your stride, because some lucky clan spawned within a few tiles of a Relic of the Gods, massively boosting their lore output beyond the reach of anyone else. Admittedly, the algorithmic map creator very rarely churns out something unfair, but when it does, it feels like wasted time, even when it works in your favour.

It’s a testament to Northgard’s balancing that when the map’s key points are evenly distributed it’s nigh impossible to resist placing one more building, reassigning one more villager or forming one more warband. Balancing all of your clan’s resources while racing towards a victory path is a tough ask, and on your first attempts you will fail multiple times over. Fortunately then, the promise of a new starting situation and the option to choose from three different clans, each with their own starting, mid and endgame bonuses, is enough to prompt you into starting a new game. 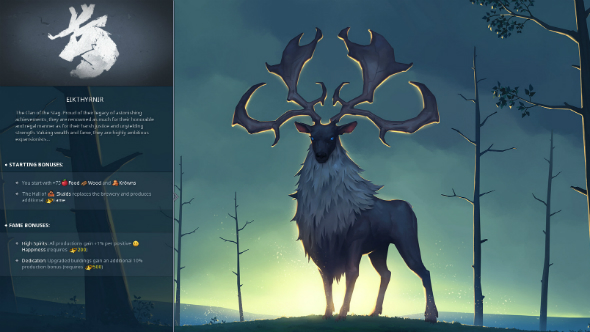 The foundations are rock-solid and engaging, but there’s plenty of scope for additional clans, buildings, professions and military units to keep tactics and options fresh. The main features yet to be added are a campaign and multiplayer matches, and only time will tell if they’ll live up to the high expectations set forth by the game’s highly addictive, and surprisingly deep skirmish mode.

The only concern at the moment is that if those additions don’t come soon, then the majority of Northgard players will move on to something with more features to play around with, as after ten hours with Northgard I’m starting to sense that there’s little else left to see or do without simply ramping up the difficulty.

Been playing a lot of Northgard? Let us know how you’re getting on with it in the comments section below.