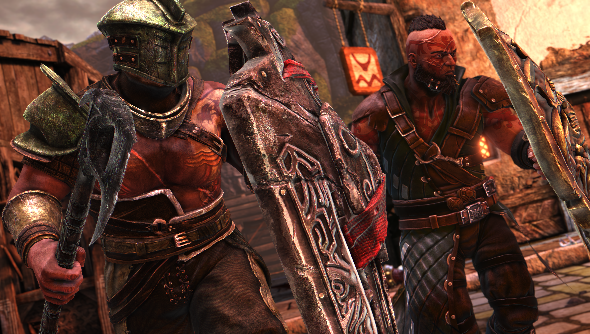 The open beta for Nosgoth has picked up a brand new class for its human heroes. The Vanguard is a much beefier class than we’ve had access to before, equipped with a damage-absorbing shield and a throwable axe. It looks like players who traditionally choose tank-like roles now have a human to play with.

The Vanguard’s primary attacks are all ranged, but are less effective than other ranged classes to balance out the defensive abilities granted by the shield. That shield can repel frontal attacks, reducing damage by 90%, and ignoring stagger effects. The shield is only effective up to a point though; should an attack be stronger than the damage threshold the block will break and leave you vulnerable.

The shield can be used to charge and bash opponents, and the Vanguard also has a team buff that fortifies nearby allies with better movement speeds and life regeneration.

The Vanguard is avilable now, but must be unlocked in-game. You can access him through the use of an artifact, or purchase him with runestones. Until Sunday March 1st, the price of the Vanguard is discounted by 25%.