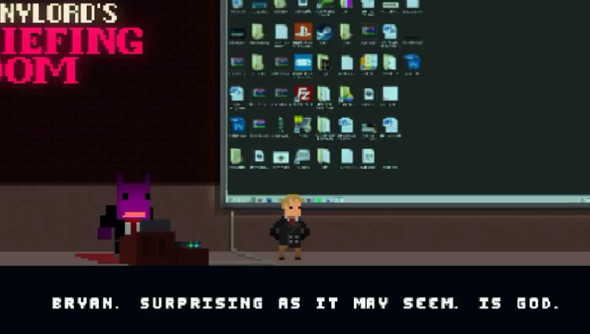 Bryan Henderson, the winner of 22 Cans’ cube-tapping game Curiosity, was promised godhood by Peter Molyneux. 22 Cans have yet to deliver on that promise. Godus, the game Bryan was to be god of, is far from complete. However, Roll7, makers of Not A Hero, delivered.

He now appears in Not A Hero as God.

“I was one of the many people tapping away at the original Curiosity game,” Digital Devolver’s Nigel Lowrie told Polygon. “When the news came out that Bryan might not see his grand prize come about it was pretty disheartening and felt that it makes the rest of us behind the ‘game development curtain’ look bad.”

Molyneux recently admitted that many of the features promised during Godus’ Kickstarter will not be delivered. Shortly after, Eurogamer ran a feature revealing how, since the original announcement, Bryan had been ignored and forgotten by Molyneux and 22 Cans.

Just when it seemed Bryan would never get his reward, Devolver stepped in like some sort of deus ex machina, and saved the day.

“To have this promise of being in a game so publicly lauded and then have it seemingly taken away is a tough story to read,” Lowrie continued. “We then thought we should help make good and get him into a game, however minor that may be, and knew that our developers would be sympathetic. We reached out to Roll7 and, feeling the same way, they immediately said they’d do it.”

You can’t actually play as Bryan, he appears in Not A Hero’s character waiting room along with the playable characters. However, he will receive a short setpiece in the game, as introduced byBunnyLord, your boss.

I reached out to the heads of all the major world religions for comment on the news that the almighty deity has been discovered but as yet have not received any responses.