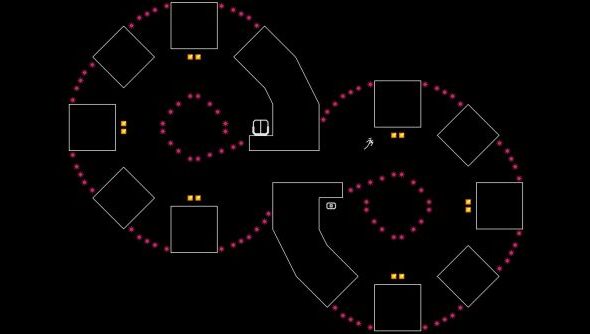 Small indie flash game N is arguably one of the best and certainly one of my favourite games of all time. It’s a masterpiece of easy to learn, impossible to finish, managing to jam so much subtletly, skill and learning into a control scheme no more complex than Mario. Its paid-for versions, N+ and N++, have been handheld and console exclusives for a while, but a move towards a PC Steam release is being made, and I couldn’t be happier.

N is actually the best of the free PC games, so you only need that list if you’re interested in the second through 110th.

For those who may not know it, N is a very simple game about leaping around small levels, avoiding enemies and finding a panel to unlock a door to escape to the next one. There’s a time limit on everything that’s extended by collecting gold, because ninjas use gold to live. That’s the lore.

It’s all 2D and has one of the best physics systems I’ve ever played with, combining a brilliant sense of momentum with logical and consistent – if not realistic – capabilities letting you scale walls, survive massive falls and slingshot yourself around levels. Its existed in one form or another for well over a decade now, and a dedicated community of map makers regularly spits out more and more difficult challenges.

N++ is a largely expanded version of that with many additions, thousands of new levels and an all-new set of sprites. It was partially funded by Sony so was a PS4 exclusive for a while, and when it launched there came with a few hard-to-nail-down bugs. One of the main programmers on the game also left shortly afterwards to work elsewhere, meaning it’s been slow going to get it perfect. A new patch came out this week that fixed some things but introduced some others, leading to one of the founders of developers Metanet Software, Raigan Burns, taking to NeoGAF to explain the issues.

Along with a problem involving invisible ninjas (we’ve all been there) he posted this snippet:

“The good news: we’ve found a new programmer, and they’ve been working on porting N++ to Steam for the past month or so. There are still a few more months of work — we want to add all of the planned post-launch-update stuff that got put on hold when our team imploded — but we will definitely be bringing N++ to Steam. We’re still looking at other platforms too.”

This was actually announced back in Decemberin their end of year blogpost, but this is the first we’ve heard a proper timeframe for it. It’ll be a long but worthwhile wait. If you want to play the original you can do so either in your browser or via download right this very second. Don’t plan on doing anything else today though.