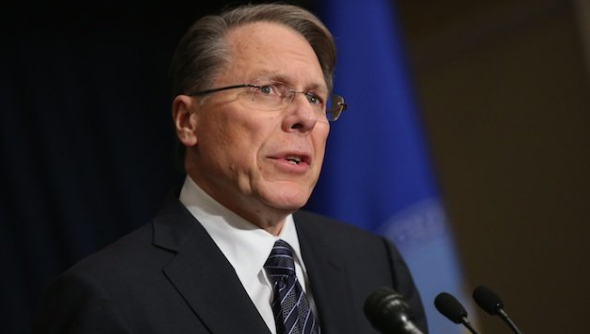 “There exists in this country, sadly, a callous, corrupt and corrupting shadow
industry that sells and sows violence against its own people,” said
Wayne LaPierre, the NRA’s Executive Vice President. He was speaking at a


press conference today, the first time the NRA had spoken publicly
since the tragic shootings at Sandy Hook Elementary School which claimed
the lives of 26 pupils and staff.

He said, as many have before, that violent video games should take at
least some of the blame for the shooting at Sandy Hook Elementary School
in Connecticut, namechecking Bulletstorm, Grand Theft Auto and a free
flash game called Kindergarten Killers.

The
film and music industries also shared some responsibility for what
happened, said LaPierre, adding that anyone who held stock in such
companies was as much part of the problem. He suggested the best way to
prevent school shootings was not gun control, but to deploy armed
officers in every school as soon as possible. “We must act now for the
sake every child in America,” he said. You can examine the NRA’s remarks
on the National School Shield here,
a document in which the NRA opens by talking about protecting the
nation’s “critical infrastructure” and of children being the country’s
“most precious resource,” as if they’re assets, not people. Hardly the
most affectionate language when you’re talking about people’s families,
but I digress.

By
now, gamers will know that this sort of thing is inevitable. Every time
another mass shooting happens, the blame is placed upon videogames,
usually with a leap of logic or some very questionable reasoning. The
sort of parties who attribute the blame have no interest in hearing how
hundreds of millions of people play videogames every day and are never
inspired to commit acts of senseless violence. The NRA have no interest
in hearing the argument that, though they may not advocate these acts of
violence, they certainly advocate the tools that make them not only
possible, but very easy.

Without
firearms, LaPierre insisted, American children would be left “utterly
defenseless” in a society that is ”populated by an unknown number of
genuine monsters, people so deranged, so evil, so possessed by voices
and driven by demons that no sane person can possibly ever comprehend
them. They walk among us every day. And does anybody really believe that
the next Adam Lanza isn’t planning his attack on a school he’s already
identified at this very moment?”

Clearly,
LaPierre has no interest in trying to identify, understand or address
the causes of mental illness. Similarly, the National School Shield is a program whose only aim is only to defend
schools from gunmen, not understand what leads those gunmen to make the
choices that they do, and certainly not to ask how they are able to get their hands on so many deadly weapons so easily.

Meanwhile, the NRA website is calling for new members to help “fight back”.
I think it’s worth noting that, while LaPierre’s organisation also used
the press conference to accuse videogames of “selling violence” to
children, violent video games are age-rated, while the NRA has no
restriction on the age of its members and encourages under 15s to sign
up by offering a subscription to Insights, its magazine for junior members.

UPDATE: I’ve just been made aware that another mass shooting has occurred in Altoona, Pennsylvania. According to Gawker, current reports say that four people were shot dead and another three were injured. In a cruel twist of irony, while the NRA was claiming that gun ownership would prevent such mass shootings, the casualties appear to include state troopers, officers who are both armed and well-trained.

It takes a particularly shocking sort of naïvety to really believe that the presence of “good guys” with guns will prevent the “bad guys” from being able to shoot anyone.