Nvidia have finally confirmed the details for their latest graphics card – the GTX 1070 Ti. While its existence has been far from a secret, Nvidia have now locked down and released the specs and pricing of their most likely final Pascal-based card. You never know, they might always have a 1060 Ti up their sleeves…

Only the best gaming monitors can make the most out of that shiny new graphics card.

The GTX 1070 Ti will launch worldwide on November 2, 2017 to the tune of $449 / £419. This puts the Pascal-based card in the prime spot between the GTX 1080 and GTX 1070 in terms of pricing. However, it unfortunately means we will have to wait a little longer for definitive performance benchmark results. 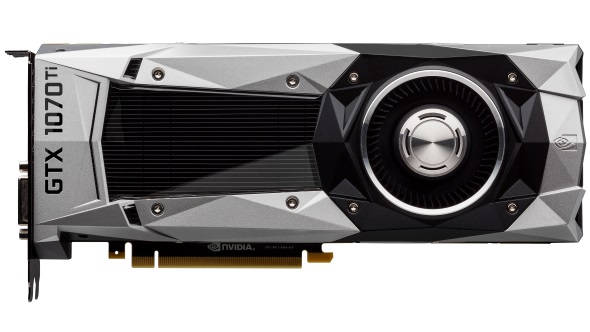 Nvidia claim they “designed the GeForce GTX 1070 Ti to be an overclocking monster, with plenty of headroom for gamers to crank up the clock speeds.” Well, that dispels those rumours…

Founders edition cards are available from today on the Nvidia GeForce site and, thankfully, will arrive at MSRP. A heap of third-party cards will also launch alongside the Nvidia reference card, although these cards likely won’t be featuring any factory overclocks at first.

The GTX 1070 Ti slots in right between the GTX 1060 and GTX 1080 in Nvidia’s product stack, so it comes at no surprise that early performance leaks put the card right between these two cards in terms of performance. With Nvidia’s latest claims of fantastic overclocking performance, it would be unrealistic to believe these cards may be able to eke out performance similar to the GTX 1080 with only a little convincing.

Check back on November 2nd for our full review along with in-depth benchmarking of the GTX 1070 Ti.