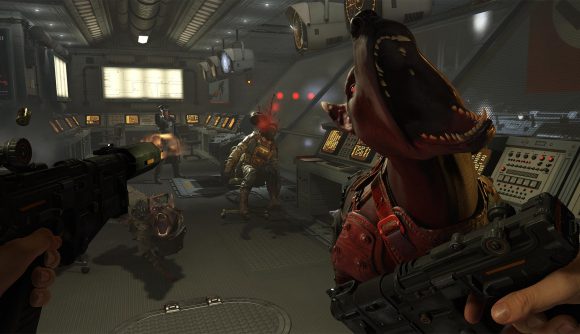 Bethesda has rolled out a patch for Wolfenstein II: The New Colossus that activates Nvidia Adaptive Shading in-game. The feature, one of the selling points of the Turing architecture, allows an RTX 20-series GPU to actively reduce shading in-game with negligible effect on the quality of the final outputted frame, and bumping performance by around 5%.

Content Adaptive Shading (supposedly now renamed to Nvidia Adaptive Shading, or NAS) is a rendering process Nvidia has employed within the Turing architecture. It allows the shading rate to be manipulated for different areas of an upcoming frame based on how much detail was in a given area within a previous frame. Essentially, if there’s an area within a scene that contains little detail, the GPU actively drops the shading rate to lessen the impact of rendering that area in a subsequent frame.

Wolfenstein II is the first title to make the most of the functionality baked into the Turing architecture, and early testing carried out over at Guru3D points towards a ~5% performance bump in-game with max adaptive shading at 4K and 1440p Ultra. That’s not hugely impactful in the grand scheme of things for the Vulkan title, which already runs exceptionally well on Nvidia’s latest and greatest, but a sizeable fps increase due to a software patch alone is nothing to be sniffed at. 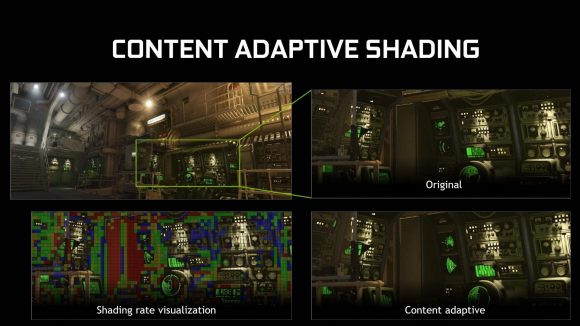 It’s worth noting that Nvidia Adaptive Shading has three presets which affect its impact on performance: Quality, Balanced, and Performance.

NAS is just one of the shading techniques within the Turing architecture under the Variable Rate Shading umbrella. While Content Adaptive Shading focuses on low-detail regions of colour, there’s Motion Adaptive Shading and Foveated Rendering, too. The former lessens shading impact for fast-moving objects and the latter adjusts shading rates depending on where the user is looking, taking advantage of the limitations of the human eye to lessen GPU workload.

If you’re in for a little light reading, check out our guide to the Nvidia Turing architecture, which has all the information on shading techniques exclusive to the RTX 20-series.