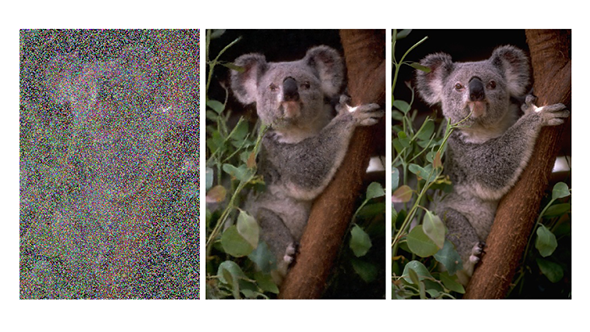 Nvidia’s latest research has created a neural network adept at taking noisy and visually-defaced images and cleaning them up. Researchers from Nvidia, Aalto university, and MIT have pitched together to create this absurdly powerful AI-powered tool that only requires two noisy images to completely fix almost totally inscrutable images.

The researchers believe this technique can aid in removing artifacts, noise, and grain from high-ISO images taken in low-light or even potentially demystify images taken with an MRI machine to aid in medical imaging devices and analysis. It’s also looking like it might be pretty handy at removing watermarks, too.

Can’t wait any longer for a GPU upgrade? Here are the best Nvidia graphics cards around.

The neural network was taught using 50,000 images, and through some AI deep-learning magic, is able to apply what it learnt to other images and make them look pretty. Where this approach differs from those before it, however, is in how this neural network approach manages to denoise images without ever seeing a clean version of the image itself.

“It is possible to learn to restore signals without ever observing clean ones, at performance sometimes exceeding training using clean exemplars,” the researchers say. “[The neural network] is on par with state-of-the-art methods that make use of clean examples, using precisely the same training methodology, and often without appreciable drawbacks in training time or performance.”

The accompanying video also shows how this approach can be utilised to completely remove words across images. That seems pretty daunting, but as the researchers confirm, the neural network cannot “learn to pick up features that are not there in the input data”, so you’ll still need two or more different watermarked versions of an image to create one without any watermarks at all.

Despite utilising the TensorFlow software library, the researcher’s utilised Pascal Nvidia P100 GPUs. While we’re still stuck with Pascal for GeForce graphics cards, the tech world has moved onto Nvidia Volta GPUs that feature Tensor Cores in the silicon itself specialised in the job of computing machine learning.

AI has already proven itself well-equipped for the task of denoising images and video. The first demos of Nvidia’s realtime ray-tracing technology utilised AI to fix the rather noisy scenes rendered by the next-gen tech. While ray-tracing might be still a long way off, AI and neural networks are looking pretty useful for both gamers and game developers. Maybe the Tensor Cores will make it into the final design for Nvidia’s GTX 1180, after all.