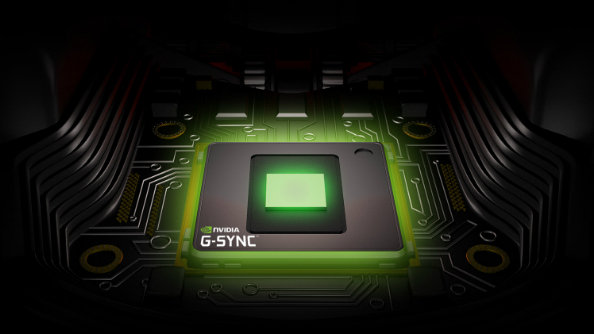 Screen tearing. It’s literally the worst thing in the world. Developers spend months – nay, years – painstakingly assembling virtual worlds of unfathomable depth and complexity, pixel by pixel, and then your lazy PC can’t even be bothered to render them properly because your GPU isn’t sending frames at an exact multiple of your monitor’s refresh rate. Brilliant. Thanks, PC gaming.

In the market for some NVIDIA silicon that’ll support G-Sync? Check out our GTX 970 group test.

NVIDIA’s G-Sync technology is designed to combat that phenomenon, and in general it works like a charm. Fundamentally it’s a line of communication between display and rendererer, syncing one to the other so that frames are rendered at regular intervals and you don’t end up with half an old frame still on the screen while half a new one appears.

The 980ti’s dynamic clock speed ramps up in tandem with the monitor’s refresh rate, PCPer discovered. At 120Hz, the refresh rate G-Sync was originally designed to operate at, clock speed remained a consistent 135MHz and power draw an equally stable 76 watts.

However at higher refresh rates, the clock speed jumped right up to a staggering 885MHz and power consumption soared to 201W. That’s not under load while dealing with demanding games, by the way. That’s sitting idle on the Windows desktop.

However, NVIDIA are aware of the issue, and they’re planning to roll out a driver update that’ll fix it. An unnamed spokesperson told PCPer:

“You were right! That new monitor (or you) exposed a bug in the way our GPU was managing clocks for G-Sync and very high refresh rates. As a result of your findings, we are fixing the bug which will lower the operating point of our GPUs back to the same power level for other displays. We’ll have this fixed in an upcoming driver.’

There’s currently no release date for that upcoming driver, but look for it out in the release notes of the next update NVIDIA roll out.