Nvidia has confirmed that Cyberpunk 2077 will be available to play on GeForce NOW the same day it’s fully released. That means it will be arguably the quickest way to get yourself into Night City the instant the game is unlocked on Steam. No 100GB+ install, no day one patches, and no worries about PC compatibility. Probably.

It’s also going to be the cheapest way for you to bag yourself some ray traced Cyberpunk 2077 action too without a PC upgrade. With the $5 GeForce NOW subscription you gain access to the RTX-enabled Nvidia servers and that means you can turn on all the pretties, and still get solid gaming performance… mostly because you’re still going to be restricted to 1080p gaming.

But why let that bother you when you can fling it onto your TV and play from your sofa, or boot it up onto your Ultrabook or slinky MacBook? GeForce NOW means you don’t have to worry about having the best gaming PC, all you need to worry about is your internet connection and how much fun you’re going to have shooting up cyborgs and assorted augmented humans in CD Projekt Red’s next gaming projekt.

The announcement was made on the GeForce forums last night where Nvidia confirmed the streaming service’s Cyberpunk 2077 coup.

GeForce NOW members will be able to grab their copy on Steam and play the game the moment it’s available. GeForce NOW Founders members can explore the streets of Night City with RTX ON, fully optimized and instantly available, even on your Mac laptop.

We’re thrilled to work with CD PROJEKT RED to bring its eagerly-anticipated game to GeForce NOW. And while you wait, be sure to check out CDPR’s critically acclaimed Witcher series, also available to play through GeForce NOW. 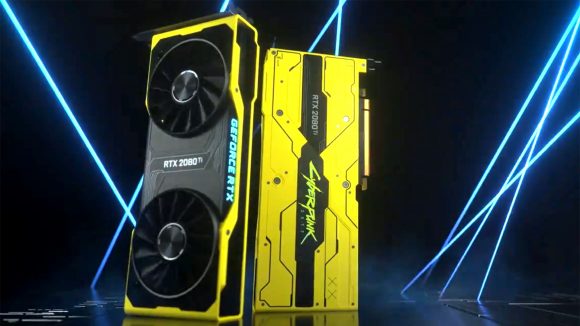 That means for just $4.99 a month you can grab the Founders sub for GeForce NOW and play Cyberpunk 2077 on practically any device the moment it’s unlocked on Steam. Obviously you’re going to have to buy it on Steam first, but that’s only like $50. Ouch…

But yes, GeForce NOW will be the cheapest, quickest way to get playing Cyberpunk 2077 in all its Nvidia-backed ray traced glory… but I can also guarantee you it’s not going to be the best way to play it. Sure, you’ll have no big PC upgrade to pay for in order to get your rig up to speed, but equally you’ll be locked to 1080p and 60Hz.

GeForce NOW might be good for a quick fix, or as a secondary way to play, but really Cyberpunk 2077 is one of the most anticipated PC titles of the year, and if there’s ever going to be a game you want looking its best, this is that game.

But hey, it doesn’t have to cost you a fortune, you could just bag one of the 77 Cyberpunk 2077-branded RTX 2080 Ti cards through Nvidia’s sweepstake. You could be that lucky.