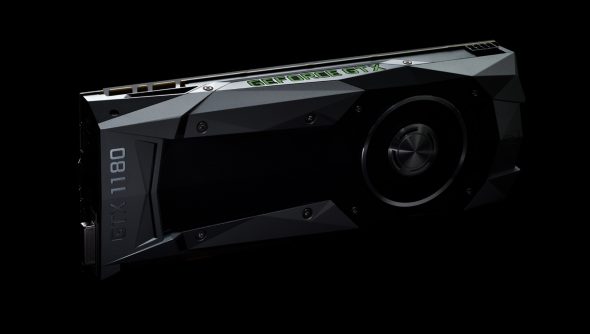 Nvidia has just announced its Gamescom kick-off show, the GeForce Gaming Celebration, taking place on August 20. It’s a public event, so you can just turn up on the door and hope you’re early enough to get in and see whatever “spectacular surprises” Jen-Hsun and his crew have in store for us.

Obviously we’re hoping for a nice new graphics card reveal, with an announcement about the next generation of GeForce GPUs rounding the night off, but Nvidia is also promising that “the event will be loaded with new, exclusive, hands-on demos of the hottest upcoming games, stage presentations from the world’s biggest game developers.”

There have been a lot of rumours and speculation that we’ll hear more about the upcoming GTX 1180 at Gamescom this year, and the timing of this GeForce event seems to good for it not to finish with Nvidia CEO, Jen-Hsun Huang, strutting around the stage waving a new GPU in the air. Not least because we’re still expecting the Hot Chips symposium to also have some new-gen GPU details on August 20 too…

Back in May it was revealed that Nvidia’s Stuart Oberman was going to be detailing the company’s ‘Next Generation Mainstream GPU’ at the Hot Chips event… before it was removed from the listing to be replaced by a big fat TBA. 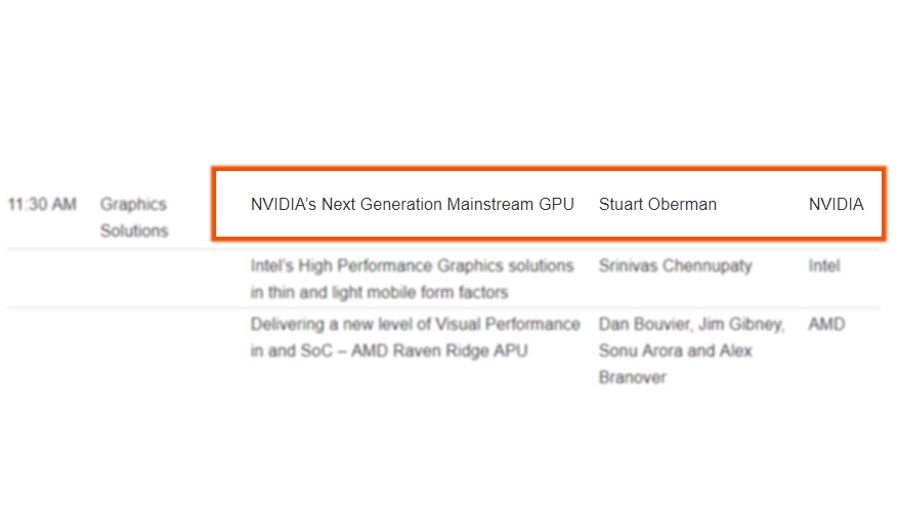 I would be surprised if Oberman’s talk had actually been cancelled, but considering Nvidia hadn’t said word one about its new generation of gaming graphics cards up to that point it wouldn’t be too pleased having Hot Chips lifting the lid on it. The talk was scheduled to happen at 11.30am in Cupertino, which would translate to 8.30pm in Cologne.

So, 8.30pm Central European Time, that sounds like a good time to announce a whole new generation of gaming graphics cards around a new mainstream GPU architecture across both sides of the pond. 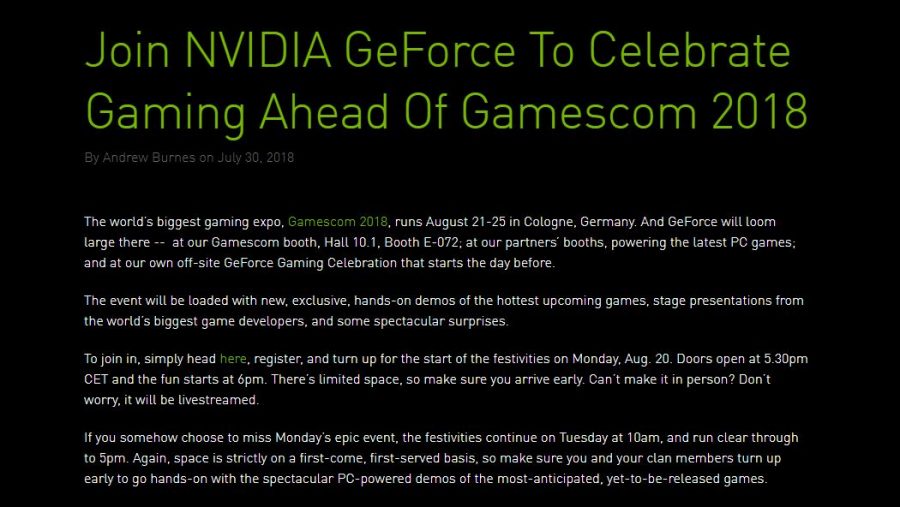 As Nvidia says, the Gamescom event is open to the public, but it’s going to be a first-come-first-served kind of deal. So if you don’t like the idea of queuing up with the masses you can always simply watch from the comfort of your own home as Nvidia will be livestreaming the entire GeForce Gaming Celebration event.

Then we’ll hopefully find out whether it is actually going to be called a GTX 1180, a GTX 2080, or whether the company has decided to take a completely different tack for its new GeForce graphics cards and move away from boring numbering. How about the GTX Alan, with maybe the GTX Derek as the more mainstream, cut-down version? It’d be different…