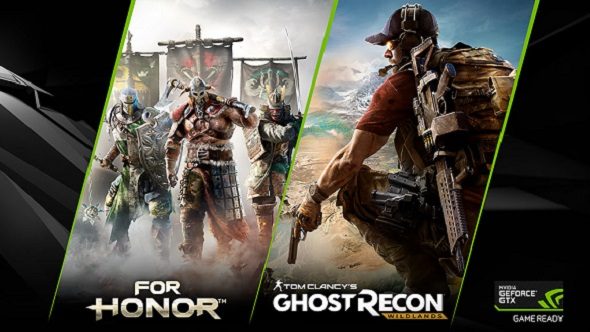 Update February 3, 2017: Following yesterday’s story on Nvidia locking promo games to the GPU they’re sold with, Nvidia have announced their next videogame promotion.

If you purchase any 10-series GPU from Nvidia, for a limited time you will also get a code to redeem either Ghost Recon Wildlands or For Honor on Uplay, depending which you want.

With our list of the best free PC games there’s no need to redeem anything.

“Play a battle-hardened warrior in For Honor or go behind enemy lines to take down the cartel in Ghost Recon: Wildlands,” says the Nvidia email. “For a limited time, you can take home your choice of these Ubisoft titles for free when you get Game Ready with a GeForce GTX 1080 or 1070 graphics card, system, or laptop.”

Just keep in mind that you will need to verify your purchase and redeem the code once your GPU is installed. See the original story below for more info.

Original Story February 2, 2017: From now on, if you buy a new GPU in one of Nvidia’s upcoming promotions, usually where they’re bundled with a game or two, you’ll only be able to redeem to code yourself.

Now, when you buy a GPU bundled with a code, you will need to verify the hardware through GeForce Experience before it can be redeemed, so you’ll need to have your graphics card installed first.

Additionally, your GeForce Experience account must show that you’re legally old enough to play the title.

“Game coupon codes offered as part of a qualifying GPU or PC purchase are intended for use by the purchaser,” says the Nvidia FAQ.

“As part of the coupon redemption process, Nvidia uses GeForce Experience to perform a hardware verification step to ensure the coupon code is redeemed on the system with the qualifying GPU.”

This is likely to stop people selling them on through key markets and the like.