Gigabyte is running a Hallowe’en promotion around Nvidia graphics cards, and specifically the Nvidia RTX 2070… and the RTX 2070 Ti. What witchcraft is this?! We’re only just seeing the release of the RTX 2070 today and already there’s a 2070 Ti on the way? I mean, we’ve not seen the RTX 2070 yet as the UK shipping has been all screwy on review samples, but hey, it’s new GPU fever at the moment.

Except… no. Gigabyte has already come out and said, in response to the supposed leak, that it was just a typo on the promotion and that no such card exists. Given that the RTX 2070 represents the full implementation of the TU106 GPU, any RTX 2070 Ti card would have to be running on a cut-down version of Nvidia’s RTX 2080 GPU, the TU104.

It’s not beyond the realms of possibility for that to happen – the GTX 1070 Ti is an only slightly cut-down version of the GTX 1080 after all – but it’s way too soon for that sort of card to appear. Realistically Nvidia will likely hold back any potential RTX 1070 Ti until team Radeon launches its new AMD Navi graphics cards next year.

The promo first came to our attention on Reddit, where a Gigabyte representative had already jumped on the image post and issued a detailed rebuttal. 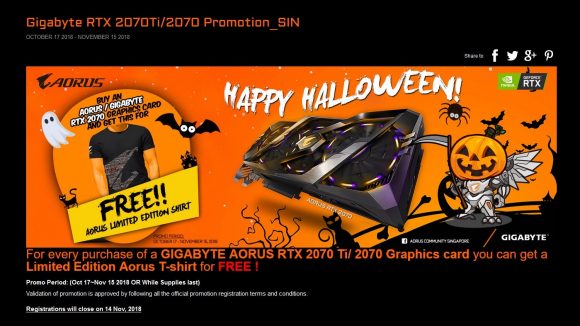 “Can confirm this is a typo, sorry guys,” says the response. “A couple things – First no such card exists (seriously!) second if you don’t believe me and think it does exist look at the typical turn round for high end models…

“AORUS cards usually come 1-2 weeks after the launch of the GIGABYTE cards (IE Gaming OC, Windforce.) This promotion ends Nov 15th. That means in less than a month you would see a new card, never before even rumored, then the high end variant, all in the next 30 days. Not to mention that 30 days includes skuing up and selling in what appears to be Singapore, a market that again usually lags behind in on the shelf availability.”

It’s a pretty comprehensive take-down, and the rep’s points do seem utterly valid. Though, as we said earlier, it’s not impossible that such a card will pop out from the GeForce stables a few months into 2019.

But what about that promo, eh? That’s one hell of a T-shirt, and exactly the sort of high-end gift you’d expect for spending around $600 on a new graphics card.