Gordon and Alyx go to White Forest in the final – so far – chapter in the Half-Life saga, buffed up for NVIDIA’s hot set-top box.

If you’re not up to speed with the SHIELD Android TV, it’s the latest member of NVIDIA’s SHIELD family that plugs straight into your TV. It’s a best in class set-top box that’ll wow you with crisp 4K video and 7.1 surround sound, and it’s a fully-fledged Android device suitable for any number of apps from the Google Play store.

It’s also a serious little piece of gaming hardware, though, ready to stream HD games from NVIDIA’s GRID service or straight from your PC, and there’s a range of new and classic titles available that have been remastered especially to take advantage of the SHIELD’s top-end Tegra X1 mobile processor. 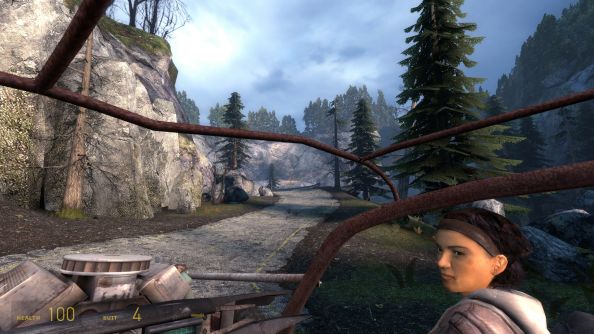 Freshly out is the final – so far – instalment in Valve’s Half-Life series. Half-Life 2: Episode 2 picks up exactly where Episode 1 left off, with silent bad-ass scientist trapped on a train that’s just been derailed on a bridge, but it’s not long until he’s freed by the ever helpful Alyx Vance and ready for action once more in his ongoing battle against the mysterious Combine that’s taken over the Earth.

While the previous games in the series have mostly taken place in either underground bunkers or grim urban environments – with forays into parched scrubland and desolate coastline – Episode 2 takes things in a fresh direction, and while you’ll naturally spend some of the game in abandoned building or underground tunnels, a lot of it takes place out in the countryside, with big, open environments to be explored and to make for some excellent running battles. 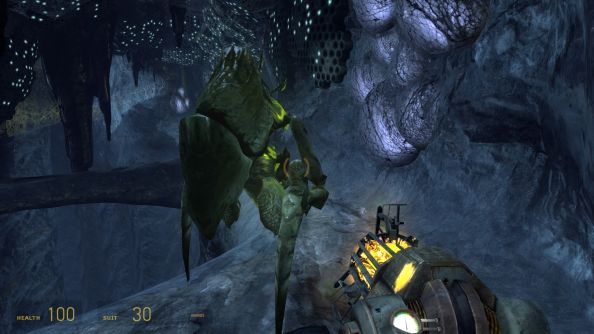 Weapons-wise, there’s nothing really new in Episode 2; however you’ll encounter some suitably dangerous new enemies along the way. The antlions make a comeback, complete with new family members that you’ll meet as you embark on a mission into their massive underground nest. Along with acid-spitting worker antlions that’ll deal an enormous blow to your health if you give them half a chance, there’s the huge antlion guardian that can take a huge amount of punishment and that you’ll simply have to run away from on your first encounter as you’re not allowed to kill it. You get the opportunity later on, though.

Completing the clan are antlion grubs: harmless giant glowing maggots that you can squash for a small health bonus. Kill all 333 of them to earn an achievement! 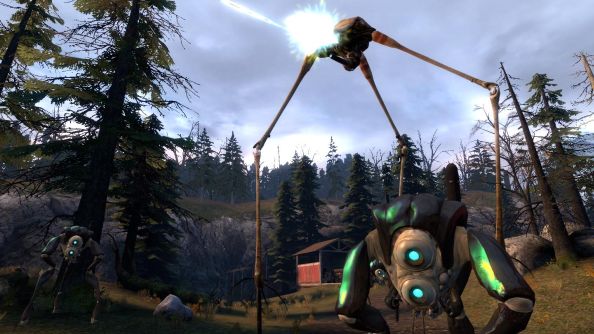 You’re unlikely to forget your first meeting with another new enemy type, the Hunter: it’s a fast and brutal eight-foot tripod that’ll blast you with exploding flechettes, and which you’ll have a hard time killing with conventional weapons. Rather than waste ammunition on a Hunter, your best bet is to get out your gravity gun and hunt for something explosive to fire at it; thankfully whenever you encounter Hunters you’re also likely to find plenty of gas canisters and exploding barrel.

The final battle in Episode 2 is an absolutely epic clash as the Combine breaks out the Striders: even bigger and meaner versions of the Hunters. You need to hold off their advance on the resistance’s White Forest base, and it’s a long and demanding fight set across an enormous forest map against an enemy that’s completely impervious, even to rocket launchers. 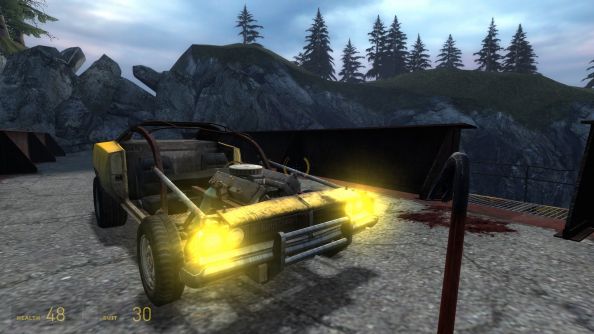 Your only chance is to fire Magnusson Devices – powerful sticky bombs – at the Striders’ bodies and then detonate them with a gunshot, but their Hunter escorts are there to make things even harder for you. Pro tip: deal with the Hunters by ramming them with your car before you take on a Strider, and run away for extra health before taking on the next Strider.

There was supposed to be an Episode 3 and the game hints at what’s next, including a glimpse of a lost Aperture Science research ship that Gordon needs to track down in order to find some useful technology that might help the resistance; portal gun, anyone? It’s a shame that the series comes to such a sudden halt – particularly as Episode 2 ends on a low note with the death of a major character. If you’ve played all the other games then you owe it to yourself to see Episode 2 through on SHIELD; let’s hope that Valve really is quietly working on Half-Life 3 to pick up where it leaves off. Half-Life 2: Episode 2 is now available on Google Play for $7.99.