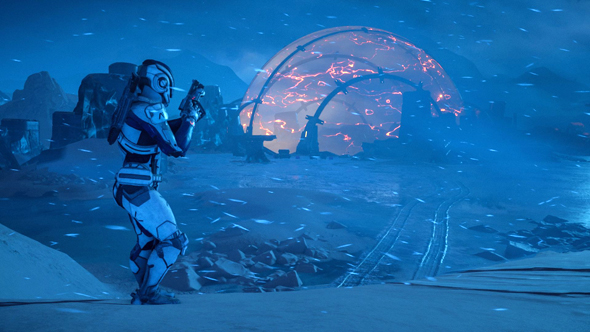 The original Mass Effect trilogy was a revelation, offering gamers an epic role-playing experience unlike any other. The Mass Effect series transports gamers to a galaxy filled with memorable characters and visually stunning worlds that come to life with rich dialogue, intense action, and a story that puts the fate of every sentient being in the palm of your hands.

Mass Effect: Andromeda changes things up by taking players to a brand new galaxy. The new setting gave the development team the freedom to build something that truly sets itself apart from the series.

Gamers can explore new worlds filled with new races, which means discovering everything Mass Effect: Andromeda has to offer will delight both longtime fans and newcomers alike. A refined combat system featuring new abilities and weapons along with an improved user interface also promises to kick the action up a notch.

Gamers who own a powerful GPU like NVIDIA’s GeForce GTX series can get the best experience possible as they can enable higher settings without having to sacrifice fast framerates. If your system is equipped with a higher-end GPU like the GTX 1070, GTX 1080, and the newly released GTX 1080 Ti, you can crank the details all the way up and still reach 60 frames-per-second or higher. You can also take advantage of high-dynamic range (HDR), and 4K resolutions for an even better visual experience. Check out the official system requirements below to make sure your gaming rig is ready for Mass Effect: Andromeda.

On top of the array of features and visual flourishes Mass Effect: Andromeda sports on PCs running on GTX GPUs, the game boasts a wide selection of customization features that really allow players to craft their own unique sci-fi experience with the game.

Owning a GTX GPU means you don’t have to fiddle with settings to maximize your gaming time. GeForce Experience automatically downloads the latest drivers to keep your system up to date and optimize your game settings based on your hardware with a single click.

GeForce Experience also enables you to take gorgeously detailed in-game screenshots using NVIDIA Ansel. At any time during your Mass Effect: Andromeda journey, you can snap stunning panoramic pics or 360 scenes that you can then share with others. GeForce Experience lets you stream to Facebook Live, so your friends can witness your heroic efforts in outer space. If you own a SHIELD TV, you can cast your Mass Effect: Andromeda session to your HDTV using GameStream so you can enjoy the interstellar adventure from the comfort of your couch.