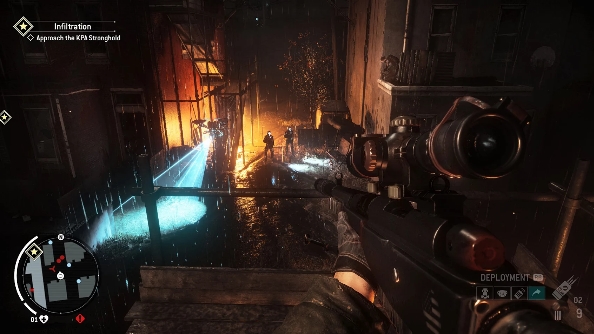 Homefront: The Revolution, the anticipated open-world first-person shooter sequel to 2011’s Homefront, is now available to download on PC and to stream on NVIDIA SHIELD via GeForce NOW. A GeForce NOW membership (free for three months and $7.99 after that) gives SHIELD owners access to a variety of blockbuster PC games they can instantly stream to their device through the cloud. Certain premium titles are also available to purchase separately on GeForce NOW, including Homefront: The Revolution. Here is a look at what you need to know about the perilous zones in the game.

Set in the year 2029, Homefront: The Revolution takes place in Philadelphia where the invading forces of the Korean People’s Army have taken control of the entire city. They’ve subjugated its citizens, viciously subduing them and keeping them in check by means of violence, total surveillance and fear of death. But a small band of Philadelphians begins to build a resistance. Their plan is to take on the KPA, not head-on, but by carefully choosing their battles and creating a sense of hope for Philly’s citizens and in doing so will hopefully spark America’s Second War of Independence.

The Red Zones are where your plan to create an uprising against the Korean People’s Army begins. These ruined suburban spaces consist of largely deserted streets and abandoned subways. The KPA has a presence here with drones keeping an eye out for subversive activity and there is a network of enemy snipers positioned around the area.

You begin by exploring the Red Zones in order to achieve a number of aims. First of all you have to set up a base of operations and secure a number of safe houses before going on to recruit more members of your resistance army. The major thorn in your side is that the KPA’s weapons are biometrically locked, so the resistance has to scavenge for old weapons caches and other equipment with which they can put together a home-brewed arsenal of weaponry. The weapons are modular in nature meaning you can use them for multiple purposes. For example, a shotgun can be modified to become an automatic weapon and even an incendiary device simply by adding parts to them. This is true of many of the weapons in the game and you can even swap out modifications while in the thick of battle.

You also have a Guerrilla toolkit, which includes tools for making incendiary devices, IEDs, distraction devices and a hack tool for disabling or commandeering security cameras, drones and turrets. The path to success in the Red Zones is a combination of laying traps, setting up ambush points and systematically taking out the KPA snipers.

Having laid some solid foundations for operating the resistance forces from the Red Zones, you then need to progress into the Yellow Zones and start work on initiating a popular uprising against the KPA oppressors. Yellow Zones are where the majority of the oppressed population resides. These areas are densely populated, heavily guarded and the citizens are living in fear. It’s up to you to show them they do not have to put up with the status quo and they can fight back.

You can do this in a number of ways, many involving using covert tactics to spread the message of dissent. For example, here you will need to move from place to place by blending in with the crowd. You can sabotage comms links and stop the broadcast of enemy propaganda being displayed on giant telescreens around the city, substituting instead you own messages of freedom. Rescuing prisoners of the state is also important for your mission. The more of these acts you carry out, the more you will see the attitude of Philly’s citizens changing before your very eyes. You will inspire them to rebel and rise up in defiance.

Green zones are the heart of the KPA regime. This is where the leadership and wealthy sympathizers live. The forces here are armed to the teeth and these areas are essentially fortresses. However, the targets are of a very high strategic value and it’s here that the resistance movement and its swelling number of supporters can fully exploit all the techniques and technology they’ve mastered in the previous zones to take the fight to the enemy. This is the endgame—make it count and you will have successfully triggered the war against the KPA and set your once great nation on the path to victory.