Brawl is a Bomberman inspired adventure you didn’t realize you’d been waiting for, and it was just released on NVIDIA SHIELD Android TV. Obviously, you’ll find the standard, chaotic fun of boxing in your friends behind a soon-to-explode object, but there’s a little more to the experience than that. Here’s a brief rundown of the game’s many enticing modes.

Versus – This is the standard, top-down versus mode. Four players, online or offline, are dropped into a boxy room and have to drop bombs to collect power-ups and eliminate all their opponents. It’s important to be smart about which of the eight playable characters you choose, because each has their own special ability that can make a big difference in battle.

Duel – Is a four-player melee too busy for you? Want to see how well you’d do against your best friend in a one-on-one exchange? That’s just what the two-player Duel mode was made for.

Classic – Did you wish Brawl was even closer in style to Bomberman? Classic strips away all the specialized abilities and power-ups, making it just about the explosives and strategy. Finally you can put all your Bomberman Live skills to the test. 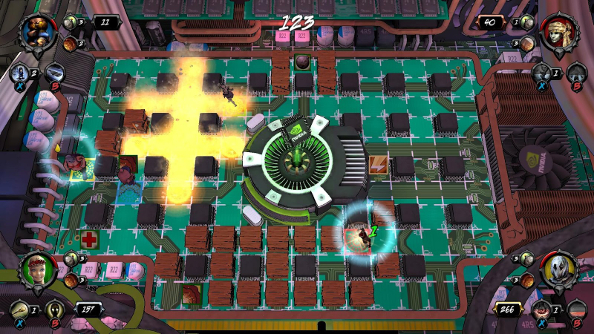 Sumo – Incinerating your friends will always be a blast, but if you’re looking to shake things up, Sumo is the way to go. In this mode, bombs don’t do damage and instead shoot out boxing gloves in four directions. The goal is to hit your opponents with them and knock them off of the stage, a clever change of pace that ends up being just as impactful as the standard mode.

Color Domination – Remember the paintball modes of classic FPS games, or the recent Wii U hit Splatoon? Color Domination has a similar “paint the town red (or yellow or blue)” mechanic. Instead of killing off enemies, you’re out to lay down bombs all over the stage to cover it in your personal paint, and your friends are doing the same. It turns into a fun, mad rush to see who can blanket the stage best in primary paint madness.

Horde – One of two solo modes, Horde takes inspiration from the Gears of War action of the same name. You’re laying down all the bombs you can to take out increasingly tough collections of minions. How long can you last?

Sheep – This solo variation on Horde puts you even more on the defensive. Your character has a collection of friendly characters trailing behind them, and you need to protect the lot of them from the oncoming hordes of minions. Try your best to be a good shepherd!

Brawl is now available to download on Google Play for $6.97.