There’s now an easier way to enjoy PC gaming: NVIDIA’s GeForce NOW. It’s a cloud-based  game streaming service, powered by six datacenters worldwide, that enables you to stream an ever-growing collection of the latest and greatest PC games instantly to NVIDIA SHIELD without having to deal with downloading, installing, patching and fiddling with the settings to get the visuals just right. Instead you can simply pick a game and play it immediately at maximum quality at up to 1080p and 60fps, with NVIDIA’s gaming supercomputers doing all the heavy lifting.

There are already well over 60 games available right now and most of them are included with your $7.99/month membership. You can also enjoy a collection of premium titles—including The Witcher 3: Wild Hunt—that you can buy and play immediately. The first three months of your GeForce NOW membership are free, and the game library is expanding all the time. New to GeForce NOW’s collection is the following selection of must-play titles from SEGA and Warner Bros. 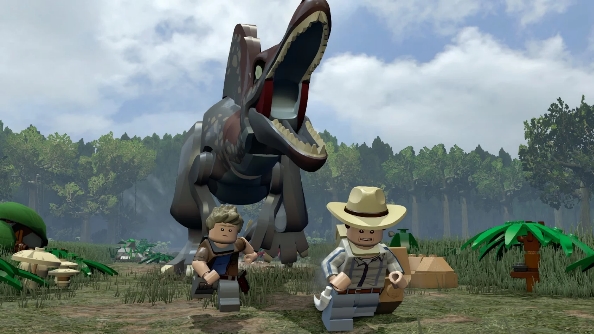 LEGO Jurassic World brings all the mayhem of the Jurassic Park movie franchise vividly to life. Over the course of 20 puzzle platforming levels you will get to take part in the most iconic scenes from Jurassic Park, The Lost World, Jurassic Park III and Jurassic World. Players will encounter more than 20 dinosaurs including Triceratops, Stegosaurus and T-Rex and by collecting various model parts in the levels you can also create your very own hybrid mighty lizards. There are also more than 100 characters to unlock, each of which has his or her own special ability.

Mad Max
($59.99 on GeForce NOW—also comes with PC code to download the game) 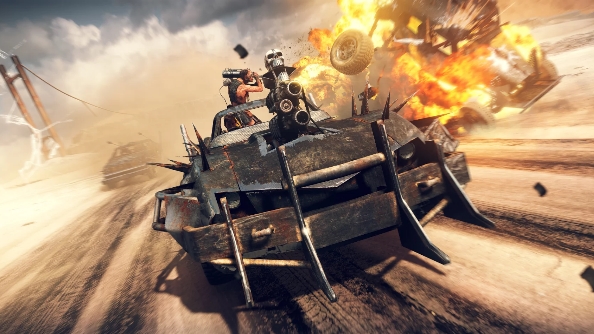 It’s been a long time coming but finally the iconic Mad Max movie franchise is a PC gaming reality and available to SHIELD owners via GeForce NOW. This bleak, post-apocalyptic open-world action game sees protagonist Max Rockatansky setting out to create the ultimate battle car – called the Magnum Opus – in order to wreak havoc on the gang of raiders who robbed him and left him to die in the wasteland. By scavenging objects found in the game’s sprawling environments Max is able to upgrade and customize his wheels and take part in epic vehicular battles. 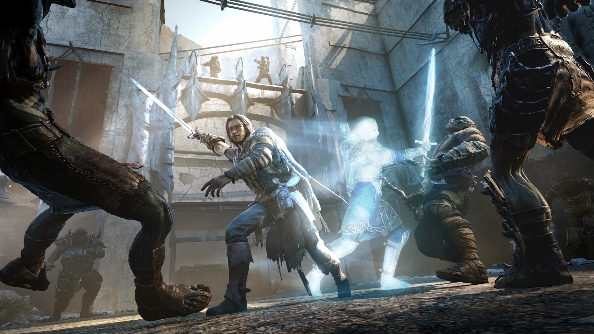 Most of us are familiar with the exploits of Bilbo Baggins in The Hobbit and the adventures of Frodo in The Lord of the Rings, but what happened in the decades between those two epic tales? This is the story that is chronicled in Middle-earth: Shadow of Mordor. The game follows the life, or otherwise, of Talion, a ranger who is killed by Sauron, along with his family, in the very opening scenes of the story. He rises again in spirit form with the intention of seeking vengeance for the crimes committed against him. In this spectacular open-world adventure you can travel a brooding and beautiful Middle-earth engaging in hand-to-hand combat with your enemies and employing your new-found spirit skills. 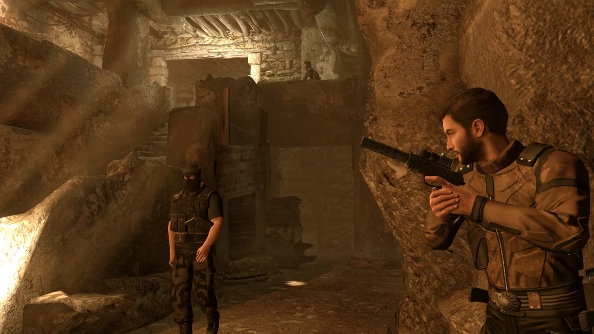 What kind of super spy are you: Jason Bourne, James Bond or Jack Bauer? Find out in Alpha Protocol, an espionage role-playing game in which every decision you make and action you take transforms your character. As Michael Thorton, an outcast agent who’s the only person with the information needed to prevent an impending international catastrophe, you’ll need all your skills to accomplish mission objectives however you see fit, in an intriguing and thrilling spy caper with many potential outcomes. 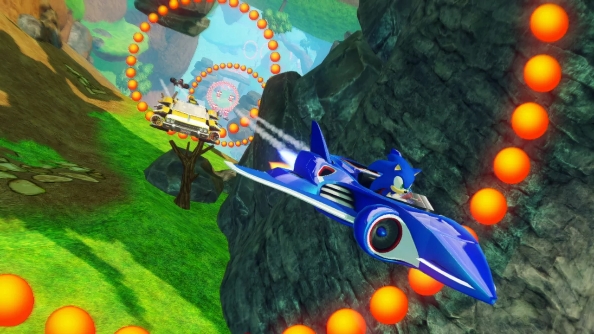 Taking a leaf out of Mario’s book, Sonic gets a bunch of his SEGA chums together for some high-speed racing action, set across 27 circuits including Sonic Seaside Hill, Curien Mansion and Blizzard Castle. Featuring a cast of SEGA favorites with their own unique vehicles that can transform to race over land, sea and air, Sonic & SEGA All-Stars Racing Transformed is frantic arcade racing all the way, with plenty of power-ups, weapons and shortcuts to help you snatch victory from the jaws of defeat. 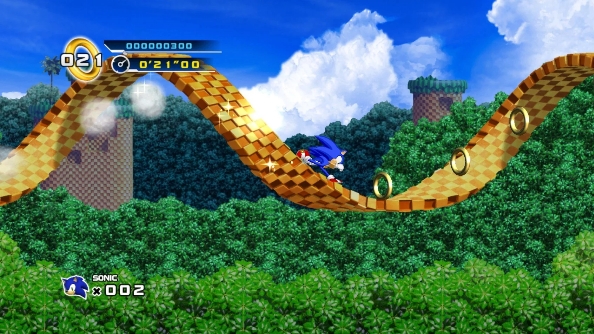 There have been plenty of Sonic games since 1994’s Sonic and Knuckles, but Sonic the Hedgehog 4 is the first proper sequel to come along since then, and it picks up where the previous game left off. It’s still 2D but with thoroughly revamped looks, and Dr. Eggman is still the big bad guy, complete with plenty of his evil creations. Sonic’s still on top form, and this time he’s bringing the Sonic Spin dash and a Homing Attack that’ll give him the edge against his old enemy, resulting in plenty of high speed, old-school action. 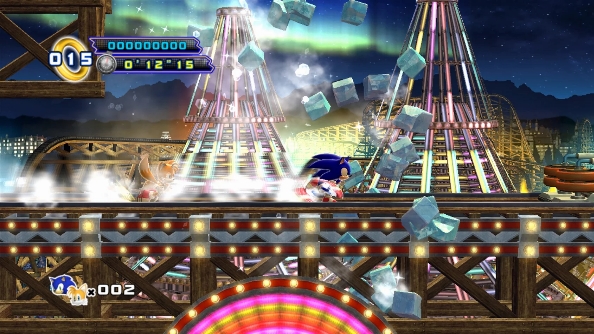 The evil Metal Sonic makes a return in Episode 2 of Sonic the Hedgehog 4, teaming up with Dr. Eggman to make life even harder for the blue spiky one. With four new zones and plenty of other new enemies along the way, Sonic is helped in this new adventure by his old pal, Tails, as well as some powerful new combination moves. With the game’s online and local co-op play you can team up with a friend for some double-headed action. 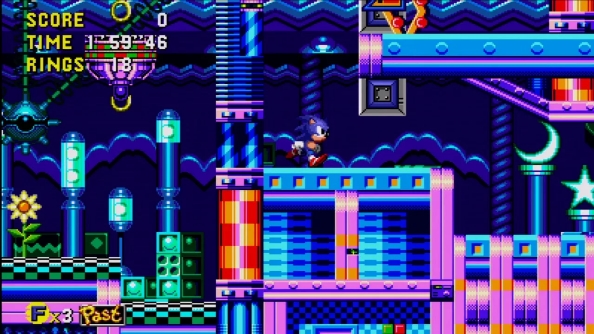 Dr. Eggman’s on the loose and will soon have the power to control time itself unless someone stops him, and there’s only one blue hedgehog that’s up to the task. In Sonic CD—an enhanced remastering of Sonic’s 1993 adventure on Mega CD—Sonic travels to Never Lake for the annual appearance of Little Planet, a world where past, present and future collide thanks to the power of its hidden Time Stones. He soon discovers that Dr. Eggman has imprisoned it within a metallic shell in order to grab the Time Stones for himself. It’s up to Sonic – with the help of Amy the Hedgehog – to go back in time, destroy Eggman’s machines and retrieve the missing Time Stones, in a thrilling platforming romp played out at maximum speed. 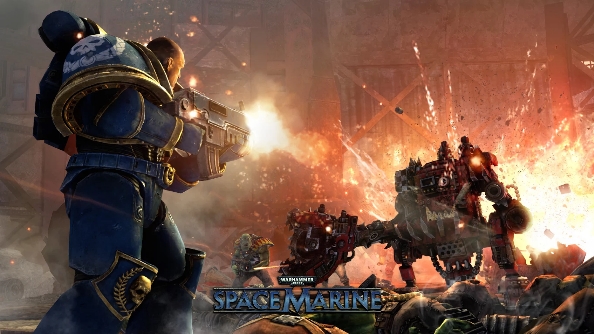 The Orcs are coming and it’s up to you, Captain Titus of the Space Marines, to hold off their invasion in this brutal third-person shooter set in the Warhammer 40,000 universe. Featuring a full single-player campaign as well as intense 8 vs. 8 online action, Warhammer 40,000: Space Marine gives you a vast arsenal of weapons, upgrades, armor and abilities to unlock as you battle to protect an Imperial Forge World against the Orc army and uncover an even more insidious threat to humanity lurking in the shadows. It’s Warhammer 40,000 at its most accessible and exciting as you do your part to ensure humanity’s survival.