Tom Clancy’s The Division has finally arrived on PC and now we can find out what it’s like to witness the aftermath of a massive pandemic in New York City. Spoiler Alert: It’s not pretty.

The game takes place three weeks after a lethal virus has been unleashed on the city. The death toll leads to the failure of essential services, one by one, until society descends into chaos and the remaining population turns on itself, rioting and forming into rival gangs.

At this point the President invokes Directive 51 activating a secret unit, called The Division, of self-supporting agents who have previously been living among us as seemingly ordinary citizens.

What follows is a squad based tactical shooter but with a sturdy RPG mechanic at its core enabling agents to upgrade and enhance their abilities and tech in order to tackle the ever more dangerous challenges facing them.

However, it’s the intriguing online multiplayer options we want to concentrate on here as they’ve been implemented in a unique and innovative way.

An area of the map is known as the Dark Zone. It is a large walled off quarantine area. When the virus first broke out, sufferers were brought here for treatment. Joining them were various military personnel, medical staff and scientists, all collaborating to combat the problem. But the situation worsened and everyone was evacuated leaving the Dark Zone abandoned and littered with resources and weaponry.

This Dark Zone represents the online multiplayer portion of the game and what’s interesting is that players working their way through the main campaign can, at any time, enter the zone, and seamlessly transition into an online game with other players.

Once inside the Dark Zone you have one main objective and that is to gather as much loot as possible, have it extracted via helicopter and then have it decontaminated so that you can use it in the main game outside the Dark Zone. Given that the loot is so valuable in the game proper, and also given that there are many agents and factions inside the zone all trying to get hold of the stuff, the Dark Zone is a place of fear and tension. 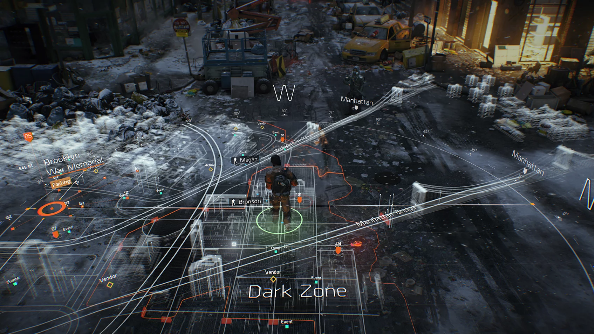 Players have several options as to how to proceed. You can team up with other agents in order to cooperate, take on other factions and get the job done in a collaborative fashion. You can go at it alone, but obviously the stakes are higher. You can even betray those you have formerly been working with by attacking them and stealing their loot. If you do so, you must be aware that you will then be tagged as a rogue and you will have a bounty on your head making you the target of any number of other players who want to take you down for the spoils.

Assuming you do work as a team and acquire some loot, the process then involves travelling to an extraction point and firing a flare into the sky to summon a helicopter. The chopper will take around 90 seconds to arrive. Unfortunately, the flare also alerts the attention of other players so you have to then defend the extraction zone until the loot is safely out of there.

This play mechanic of being able to seamlessly dip in and out of the Dark Zone to join other real world players promises to be one of the key highlights of the whole The Division experience.