Each new Assassin’s Creed game offers up fresh features and enhancements. Assassin’s Creed Syndicate provides fans with an embarrassment of riches. There are countless tweaks and treats to be discovered but here we examine the six most fundamental and exciting additions to the winning formula.

Syndicate will feature not one but two main playable characters, the Assassin twins Jacob and Evie Frye. While each Frye has shared basic moves, they also have their own special strengths. Jacob, for example is a brawler and has new weapons at his disposal such as a kukri knife, brass knuckles, firearms and a cane sword. Evie is a master of stealth, and while she too can brandish the same weapons as her brother, she is more proficient in free-running, and tends to rely more on throwing knives, and her hidden blade. She also has eagle vision.

During missions that make up the main story mode, you will play as either Jacob or Evie, but when it comes to side missions and free-roaming, you can switch between these two characters at will. 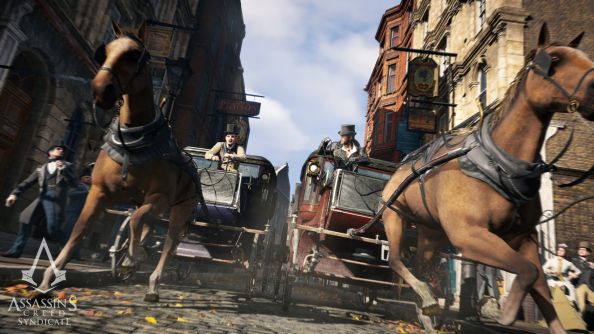 Victorian London’s streets are awash with horse drawn carriages which can be utilized by Jacob and Evie for a number of purposes. Jump aboard for a mode of rapid transportation around the city, commandeer a vehicle and take part in running battles through the streets or, if you’re trying to escape gang members or police you can use a carriage as a convenient hiding place and means of escape.

The parkour-like antics of AC’s protagonists has always been immensely enjoyable and an efficient way of getting from place to place across any given city’s rooftops. Clambering around the scenery has become even more fluid and fun in Syndicate thanks to the inclusion of a rope launcher. This can be used to grapple onto a high ledge and mechanically hoist yourself up. The rope launcher can also be attached to objects in order to create a makeshift zip-line. 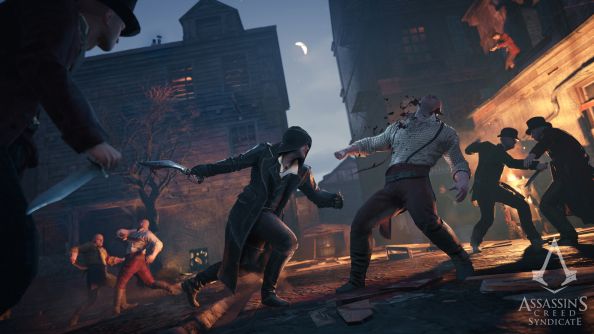 The combat in previous Assassin’s Creed outings has been fun, but a little stilted, with stealth kills, weapons and hand-to-hand encounters playing largely separate roles. In Syndicate, we find a much more free-flowing combat system. Those wishing to keep a low profile can continue to rely on stealthy tactics, but this time, when taking on a bunch of assailants, the player can seamlessly segue between beating up an enemy, while stylishly spinning around to take out another with a weapon. Combat here is a more integrated, flowing and far more rapid process than in the previous games.

The industrial revolution was fed and watered by the railways and in Assassin’s Creed Syndicate, steam locomotives play an important part. While Jacob and Evie creep around London carrying out their missions, the railway network provides the clackety-clacking heartbeat of the city. Sometimes the two intersect as we see our assassins jumping aboard the steam driven behemoths, speeding between boroughs and taking part in intense fights atop the trains’ carriages as they try to escape the fallout of an assassination. 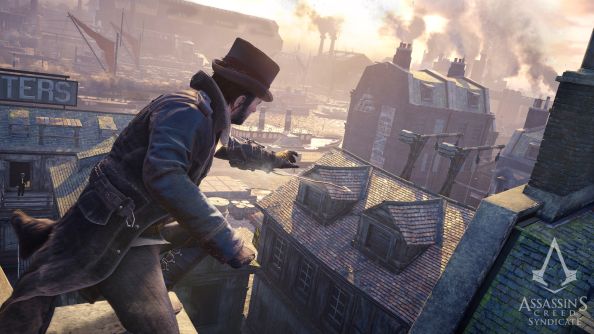 London is an amazing place and it was particularly thrilling during the Victorian era. Syndicate’s developers have captured perfectly the grime and glory of London’s industrial past. In broad strokes there are the sights, Big Ben, the Houses of Parliament, vistas of grand houses and sprawling slums. Seven boroughs have been painstakingly reproduced, from the gentrified cleanliness and prosperity of Kensington to the poverty-stricken, crime-ridden backstreets of the East End. The Thames river is a constant reminder of the city’s ebb and flow. All of this is rendered in perfect detail. Even the small details, like coal smoke rising from clay chimneys and verdant green moss growing on roof tiles, serve to make Syndicate’s environments utterly convincing.

For a limited time, NVIDIA is also offering the GeForce GTX Bullets or Blades bundle. Purchase a new GeForce GTX 980 Ti, 980 or 970 GPU, or 970M or above notebook and you will get a free copy of either Assassin’s Creed Syndicate or Tom Clancy’s Rainbow Six Siege.