It’s not every day you have to deal with the rapid spread of a viral pandemic in one of the world’s most famous and densely populated cities. That is precisely what you’re going to be up against when The Division launches on PC on March 8.

This much anticipated open-world tactical RPG shooter looks set to deliver an experience of unprecedented depth so we thought we’d dig into the numbers to see how it’s shaping up.

Agents are able to carry a primary weapon, secondary weapon, a sidearm and two special weapons. An official list of weapons in the game has yet to be released but so far the number is greater than 20. Hardware includes the Moss500 shotgun, and M4 Carbine assault rifle, Kriss Vector sub-machine gun, M9 side-arms and an M14 sniper rifle. Special weapons include homing grenades, sticky mines and mini-gun turrets that can be deployed to cause greater damage and provide cover fire.

Yup, the developers have recreated a huge chunk of New York City for you to play around in. Players get to frolic around in the city’s most recognizable playground of parks, apartments and skyscrapers. This won’t, of course, include every curb, stoplight and dumpster you’d find in the real New York City, but given the size of the area, all the interior spaces and the multiple floors of the bigger buildings, The Division’s map is a pretty huge beast. 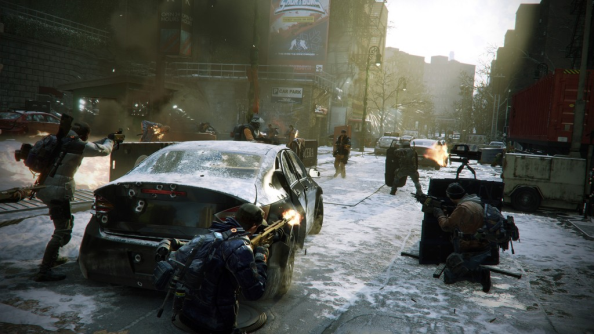 The Dark Zone is an abandoned quarantine area in the middle of Midtown Manhattan and it’s here where players go to team up and scavenge for loot during online multiplayer battles. Alternatively, you can eschew the help of other players and go rogue, attacking them and stealing their goodies. To balance things up though, should you do so you’ll have a bounty placed on your head so you will be in greater danger from other players. Once you’ve collected a bunch of loot you need to get it to an extraction point then have it decontaminated so you can use it back in the main campaign mode.

This isn’t an MMO so there aren’t unlimited numbers of players roaming around the Dark Zone at the same time, but it is estimated that there will be around 25-40 during any given session. 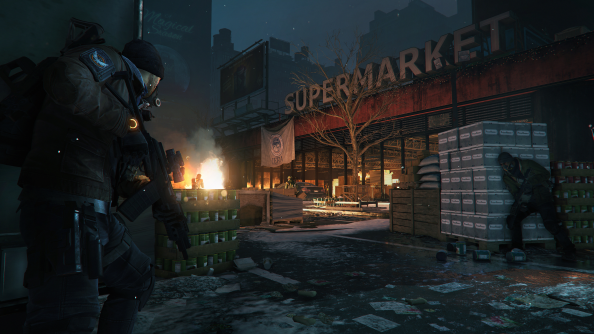 There are three different editions of the game depending on your love of all things Tom Clancy. Here’s what you get for your money.

This is the base game, including the online offering. Pre-order and you get guaranteed access to the Beta version and the HAZMAT gear set including HAZMAT suit, backpack with increased health and a POF P416 assault rifle.

This option includes the base game, the season pass which offers additional content over the coming months, and exclusive National Guard gear set. Again, if you pre-order you are guaranteed access to the beta version and the HAZMAT gear set including HAZMAT suit, backpack with increased health and a POF P416 assault rifle.

This includes the base game, the season pass, a real agent watch, poster, agent armband and art book. Pre-order this edition to get guaranteed access to the beta version and the HAZMAT gear set including HAZMAT suit, backpack with increased health and a POF P416 assault rifle.