An era of affordable virtual reality is about to begin and its impact on gaming will be enormous.

Virtual reality is virtually here, people, and it’s not just stereoscopic 3D versions of the games we’re all familiar with that we have to look forward to. Developers are beginning to explore new and exciting ways to take advantage of the technology and bring us gaming experiences unique to VR.

After years of false starts, the technology to make functioning, affordable VR rigs is finally available and in mere months we will be able to take delivery of a number of new hardware systems. Smartphone owners have, of course, already been able to dip a toe into the tantalizing waters of virtual reality thanks to the likes of Google Cardboard and Samsung Gear VR, but the full potential of this new gaming technology will only become apparent when Oculus Rift and HTC Vive come onto the market later this year.

The buzz around these systems is so great, and the commitment from developers so solid that there’s every reason to believe virtual reality will become a significant multimedia platform, delivering a new way to experience movies, social media and games.

It’s fairly easy to imagine how existing games might be relatively easy to transition to VR. Any number of action games or driving games will be getting a stereoscopic makeover, but it is perhaps more interesting to take a look at original projects that are being built from the ground up, specifically to leverage the unique strengths of VR gaming.

Of course, it is important to have a GPU powerful enough to deliver the best possible VR gaming experience. NVIDIA’s GeForce GTX VR Ready program, which gives a special badge to GPUs for PCs and notebooks well equipped to deliver that performance, is one way gamers will know exactly if they’re ready to get the most out of their virtual reality experience as VR Ready approved GPUs will get them fast performance, low-latency as well as support for GameWorks VR and DesignWorks VR technologies.

Insomniac Games – the people behind the Ratchet and Clank series of games – are bringing something entirely different to Oculus Rift. Edge of Nowhere is a completely original VR adventure that takes place in an Antarctic mountain range. The game follows the journey of an adventurer who sets out on a rescue mission but encounters a bizarre world full of surreal environments and unspeakable threats that challenge both the character’s resolve and his very sanity. If you’re familiar with the work of HP Lovecraft that will give you a pretty good idea what to expect here. What’s more, the expansive frozen vistas, yawning crevasses and shadowy caverns are perfectly designed to get the most out of the immersive nature of VR.

Another fascinating upcoming VR game is Lucky’s Tale, a platforming experience that will come bundled free with each Oculus Rift device. A third-person, cute and colorful cartoon platformer might not immediately spring to mind when you think of VR gaming but there is a precedent that suggests we should be very excited about this development. Back in 1996 Nintendo took that rather bold step of taking their hugely successful series of 2D platforming games starring a plumber named Mario and giving it a 3D makeover. By cleverly designing challenges that both harked back to the 2D games and also took specific advantage of the third dimension, and by implementing a camera system, platforming games were reinvented overnight. It’s intriguing to think that VR technology could take platforming to a whole new level. The puzzles and challenges contained in Lucky’s Tale are designed in such a way that you can use VR to examine the environments and find innovative ways to help Lucky navigate the game. Lucky’s Tale is shaping up to be a fresh and welcome take on the genre.

Another exciting application of VR in gaming (especially as we’re all still buzzing from seeing Star Wars: The Force Awakens) is to enable players to take part in spectacular dogfights in space. This brings us onto EVE: Valkyrie, a game set in the EVE Online universe but an experience built specifically for VR. Players are plunged into the midst of a series of team-based dogfights, taking the controls of a heavily armed fighter. The joy of Eve: Valkyrie is of course the fact that you can look around the cockpit of your craft and the void beyond as you scour the skies for enemy craft at a level of realism that was previously unattainable. As you progress through the game and increase your rank you will be able to upgrade and unlock new ships, each of which has dramatically different strengths and handling properties. 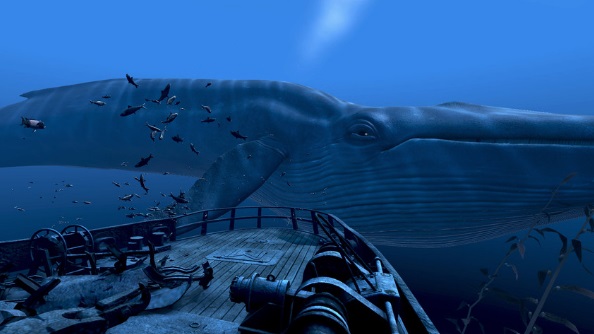 HTC Vive owners will have their own unique VR experiences when the hardware debuts later this year. TheBlu: Encounter is not so much a game as an opportunity to experience something awe-inspiring and unforgettable. It places you in the role of an undersea explorer, discovering magnificent examples of flora and fauna, haunting shipwrecks and even a close encounter with an 80 foot blue whale.

The Gallery: Call of the Starseed

The Gallery: Call of the Starseed is a dark adventure on HTC Vive in which you set out to find your missing sister but end up facing sinister forces and a cast of bizarre characters. Being physically immersed in this environment and meeting the game’s inhabitants face-to-face will prove to be a uniquely chilling experience in VR.

On an altogether more quirky level, Vive gamers will also be able to play Job Simulator, which will be available for Oculus Rift, HTC Vive and PlayStation VR. It’s set in a future where the workplace has been completely automated so the only way for human beings to experience a real job is to have one simulated through VR. So in effect players will be able to recreate current day working environments via a simulator that is, in a way, itself a simulation of the future. This premise alone should make for a fascinating, if tongue-in-cheek, exploration of the bizarre and thrilling new frontier of VR Gaming.