If you want to enjoy Kojima’s last Metal Gear at its best, you’re going to have to wait a couple of weeks for the PC version; here’s why.

Metal Gear Solid 5: The Phantom Pain is due to be a pivotal moment in the Metal Gear series as it’s likely going to be the last installment with Hideo Kojima at the helm.

Kojima’s going out in plenty of style, though, with Phantom Pain shaping up to be the biggest and best portion of Metal Gear Solid yet. We had a taste of what to expect in last year’s Ground Zeroes, a short but sweet prologue to Phantom Pain’s main event, which introduced enormous open environments as opposed to previous games’ more compact levels, adding a whole new degree of strategy to Metal Gear Solid’s stealthy approach.

It’s no longer a case of simply finding good places to hide and getting through each level unseen; now Snake needs to scope out the lay of the sizeable land, spotting enemy guards and plotting the best route and course of action, and you can be sure that each mission can be tackled in any number of ways. 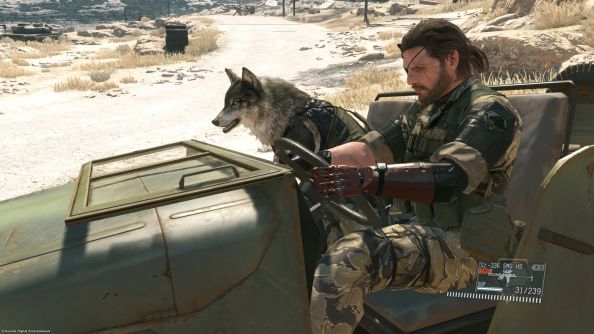 The Phantom Pain is a much bigger proposition than its predecessor; roughly 200 times bigger, according to Konami. Set in 1984, it starts with Venom Snake (that’s The Snake who eventually becomes Big Boss in Metal Gear) awaking from a nine year coma after things went wrong in the aftermath of Ground Zeroes, and setting off on a revenge mission that’ll take him from Africa to Afghanistan against a backdrop of the Soviet-Afghan war.

The huge open levels – so big that you’ll need to use vehicles to get around them effectively – are just one part of what’s going to make Phantom Pain the most complex and involved Metal Gear Solid yet. Kojima’s throwing everything at this one; notably you might acquire some AI sidekicks along the way, assuming you actually find and recruit them. There’s Quiet, a mute sniper with supernatural powers, and then there’s DD, a trained wolfdog with an eyepatch to patch Snake’s; they’re both helpful for spotting and taking out enemy guards, but if you just want to take in a bit more equipment there’s also a horse that you can load up with gear.

Another huge addition to the Phantom Pain is a fully explorable Mother Base, an offshore stronghold where you can research and develop new weapons and equipment, and train up your own mercenary army. If Snake comes across anything useful during a mission – be it some sweet gear or an enemy guard who’d make a good recruit – he can hook it up to a Fulton recovery system and it’ll get yanked into the sky and straight to Mother Base. 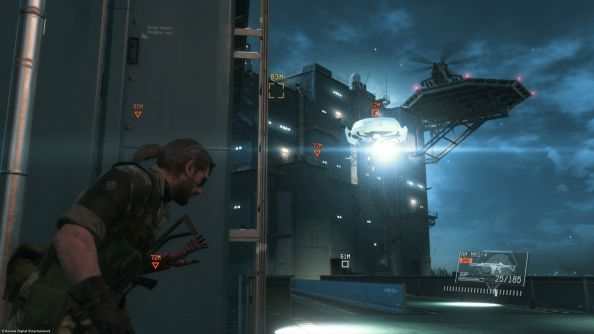 NVIDIA has already worked its magic on the PC version of Ground Zeroes, which should give you an idea of what to expect from Phantom Pain on PC. If you have a top-end system, maybe with a pair of GeForce GTX 970s in SLI configuration, you can experience Ground Zeroes – and presumably Phantom Pain – at a smooth 60fps in resolutions up to 4K, and if your display’s not quite up to the job you can use NVIDIA DSR to downscale 4K to your monitor’s resolution.

Even if your system isn’t quite up to that, there are still plenty of reasons to get the PC version of Metal Gear Solid V: The Phantom Pain, which boasts some of the most lusciously detailed environments we’ve seen in a video game. You can also score a free copy of the game with purchase of a new qualifying graphics card with NVIDIA’s new Metal Gear Solid V GTX bundle.