Nvidia’s DLSS, or Deep Learning Super Sampling, is now available for the first time within Final Fantasy XV Windows Edition. This is one of the signature features of the Turing architecture and utilises the Tensor Cores within the GPU die to intelligently combine multiple frames into one final, smooth as heck image, while utilising fewer input samples than traditional super sampling techniques.

There are two steps to running DLSS on your rig at home, assuming you have the necessary hardware. For now, assuming you have all bits, you need to download the latest Nvidia drivers, 417.35 WHQL, either from Nvidia’s driver page or through the GeForce Experience app. Aside from DLSS support there are a few bug fixes in the update, so well worth a download, Turing or otherwise.

You also need to make sure that FFXV: Windows Edition has been updated via Steam. Be warned, the patch is over 14GB. With both patch and drivers in place, you can turn DLSS on from within the options tab from the title menu. From here select graphic settings, image setting preset, and change to custom. Under Anti-aliasing the DLSS option should now be available.

There is a true AA technique within DLSS too, although this is referred to as DLSS 2X. This renders the frame at the target resolution, say 4K, but utilises inference to output a supersampled image that would otherwise be impossible to achieve through normal rendering on today’s tech.

Nvidia released the video below to demonstrate the differences in image clarity between TAA and DLSS, although do note that the left-hand pane is running a GTX 1080 Ti, while the right is an RTX 2080 Ti. 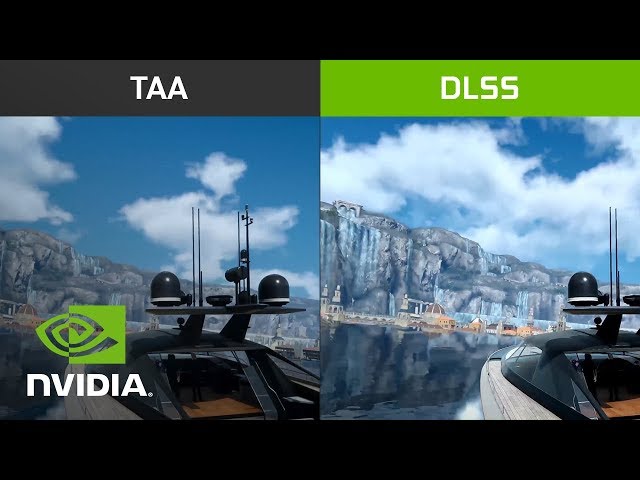 Nvidia confirmed a bunch of new titles ready to adopt the new super sampling technique, including Darksiders III, SCUM, Hitman 2, and PUBG – bringing the total to 25. Yet so far Turing is only able to flex in a single title: FFXV. Hopefully Nvidia’s “DLSS momentum” referenced back in September will be actually paying dividends to the consumer sooner rather than later.