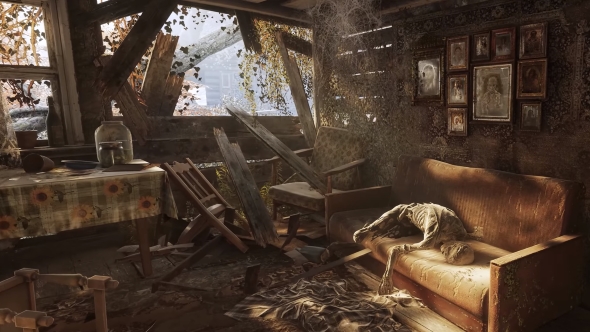 Metro: Exodus is likely to be the very first game released into the wild that uses the Nvidia RTX real-time raytracing in action, and they’ve just released a new GDC demo which shows it off.

To deal with the lovely new visuals you might need a lovely new screen, so check out our pick of the best gaming monitors around.

This is the one we’ve been waiting for. For all the incredible tech demos showing off what developers and engineers can manage when all they need to do is highlight how good the shiny new visuals can look, it’s a different thing entirely to show them running in a game that you will actually be able to have in your Steam library. And relatively soon too.

Metro: Exodus, from 4A Games, is going to be released this year, probably in the packed autumn season, and will take advantage of both the Microsoft DirectX Raytracing and Nvidia RTX technology when it is. Of course you’re going to need to have a Volta-based graphics card to actually take advantage of RTX, so surely, surely there will be new Nvidia Volta gaming cards launching before, or with it.

It’s not going to use the full suite of possible real-time raytracing effects proposed by Nvidia in their RTX introduction, but the demo shows their raytraced ambient occlusion and indirect lighting effects.

“Dynamic lighting has always been a priority for the Metro series,” says 4A Games CTO, Oleksandr Shyshkovtsov. “We intentionally avoided pre-baked data and were relying on real-time methods to build our visuals to support more flexible, dynamic gameplay. Global Illumination is highly important for the proper “grounding” of objects and readability of shapes, which in turn create improved ease of navigation and enhanced visual impact for the player

“Previously, we had utilized a mix of several custom-made systems to satisfy our hungry demand for dynamic content of varying scale. Now we are able to replace it with one single system that covers all our needs and outputs the quality of offline renderers.”

With both a new 3DMark raytracing test and Metro: Exodus’ benchmark arriving this year we’ll be able to really push new graphics cards of the next generation to their limits to see what they can really do. And if Metro: Exodus isn’t a launch title, and/or freebie, with the GTX 2080 and GTX 2070 graphics cards I’ll eat Tony G.