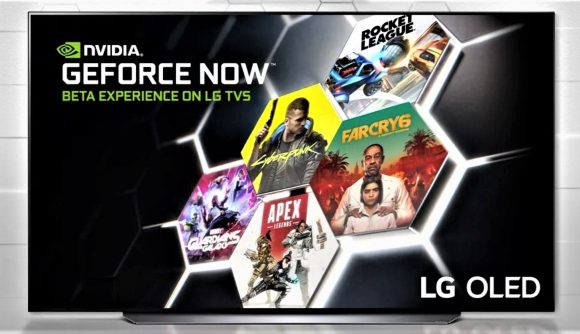 GeForce Now is a force to be reckoned with, one that recently transformed an old phone box into something that can run Crysis. Yet, while the green team’s red, RGB-clad project feels both slightly redundant and requires leaving the comfort of your living room, a new partnership with LG means your TV could also now be a gaming PC.

Compatible with select 2021 LG OLED, QNED Mini LED, and NanoCell sets, the new GeForce Now WebOS app provides users with access to a plethora of PC games. However, the software’s beta status comes with 60fps 1080p limitations, meaning the experience won’t make full use of new RTX 3080 memberships. You also can’t use a gaming keyboard and mouse in-game, something that’s sure to niggle hardcore PC gamers. That said, using gaming desk peripherals from your couch isn’t ideal in the first place, unless you invest in something like Corsair’s K63 lapboard.

LG’s take on GeForce Now streaming might seem lacklustre compared to its cloud-capable Windows and Android counterparts, but built-in PC game convenience could help Nvidia’s stream service shine. Sure, gaming TVs aren’t anything new, but the green team could succeed where products like Samsung’s PlayStation Now compatible set have seemingly failed. Although, let’s be honest; the best all-in-one gaming screen is still that weird Sony Bravia with a PS2 bolted onto the bottom.

LG first mentioned its collaborative GeForce Now cloud TV capabilities at CES 2021 alongside Google Stadia compatibility, so perhaps the latter is also in the pipeline. That said, while ongoing graphics card shortages could help streaming services become more prominent, their inherent limitations and rumours of both an RTX 3000 refresh and new RTX 4000 range could give gamers cause to hold out for a hardware solution.