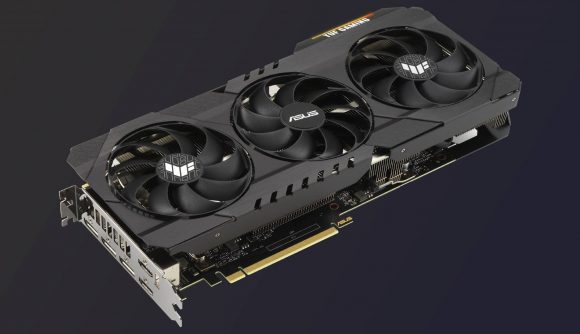 The ongoing chip shortage situation is wreaking havoc in the gaming PC scene, with products like Nvidia’s RTX 3070 Ti 16GB and RTX 3080 12GB suffering indefinite delays. While the green team released an entry-level RTX 2060 12GB revamp and an RTX 2050 laptop GPU this month, many enthusiasts are still looking for the best graphics cards money can buy. Thankfully, leaked snaps of an Asus branded RTX 3090 Ti box could confirm the card’s existence, and it looks like it’ll wield a beefier cooler.

Spotted by leaker 9550pro, the image depicts an Asus TUF Gaming branded RTX 3090 Ti, complete with packaging spec blurbs. According to the packaging, the revamped GPU will use PCIe 4.0, which contradicts whispers regarding PCIe 5.0 support. Previous rumours also suggest the new card will feature 24GB of GDDR6X memory, but the photographer’s awkward angle makes it hard to determine its included VRAM.

You should take the leaked RTX 3090 Ti box image with a grain of salt, especially since Nvidia hasn’t confirmed the SKU’s existence. That said, we’ll likely hear more about the green team’s PC gaming plans at CES 2022, so perhaps the rumour mill is right about a January 2022 release.

It’s also worth noting that Nvidia’s RTX 4000 next-gen lineup could also arrive later next year. Congress is also considering introducing measures to prevent Grinch bots from snaffling up RTX 4000 stock, which means getting hold of high-spec GPUs could be a reality next Christmas.