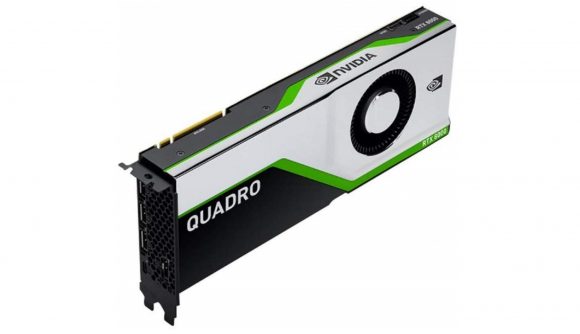 Last weekend Geekbench database entries were unearthed that hinted at upcoming Nvidia Ampere (maybe) GPUs boasting 108 and 118 Streaming Multiprocessors (SMs) capable of (maybe) performing up to 33 TFLOPS. There are still a lot of question marks surrounding the whole affair. These results were posted in October 2019, but were only actually discovered very recently. And today we’re discovering that this might only be the tip of the next-gen GPU iceberg.

There have been more discoveries from the Geekbench database depths, with Twitter user W_At_Ar_U (via VideoCardz) linking two further benchmark results, one of which showing an Nvidia GPU with 124 SMs and 32GB memory.

To put that into context, the Quadro RTX 8000 GPU, utilising current Turing architecture, has only 72 SMs. This newly discovered powerhouse of a GPU, if it exists, would have 72% more SMs than the Quadro RTX 8000, and while that number might not translate directly to performance, it wouldn’t not correlate with something beefy, either.

Current Turing GPUs have 64 CUDA cores per SM, so if the rumoured Ampere core-to-SM ratio stays the same as Turing’s, this 124-CU GPU would have 7,936 CUDA cores. I must reiterate, of course, that this is all very hypothetical. Geekbench could have made a mistake with the SM count, or Nvidia could go for an entirely different core configuration – we simply don’t know at this point.

But guessing is fun, so let’s take the non-gaming HPC GPU and compare it to the highest-performing gaming GPU (why not?) of this generation, the RTX 2080 Ti. The 2080 Ti houses 68 SMs and 4,352 CUDA cores. The most powerful of the unconfirmed Ampere GPUs on the Geekbench database has about 82% more SMs and therefore, possibly, 82% more CUDA cores than the RTX 2080 Ti. Now, I’m not saying that this GPU will play Deus Ex: Mankind Divided on Ultra at 124FPS, 56FPS higher than the 2080 Ti, but… (No, really, this is all super-hypothetical, but fun to imagine nonetheless).

Besides which, if these GPUs exist they likely won’t actually make the best graphics cards for gaming – they’ll be HPC GPUs like the current Quadro lineup, intended not for gaming but for large-scale complex applications requiring as much parallel processing as possible. There will be better (read: more affordable) options for gaming.

Whatever the rumours, there may be further information on Nvidia’s new graphics architecture to surface during its now-online GTC conference that will take place over the coming weeks. But don’t hold your breath.