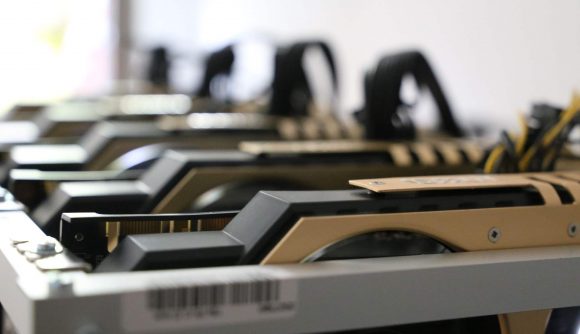 Nvidia’s RTX 3000 series has some of the best graphics cards available on the market thanks to proprietary technologies like DLSS, but they’re also exceptionally good at mining cryptocurrency. This has contributed to unprecedented levels of demand that Nvidia has attempted to curb by introducing lite hash rate (LHR) limiters, but Tom’s Hardware reports that crypto miners have found a way to circumvent the constraints.

In April 2021, Nvidia confirmed it would re-release most of its RTX 3000 GPUs with LHR limiters, which significantly reduces a card’s mining performance. The only exception was the RTX 3090 due to its apparent lack of popularity amongst miners. The hope was that this reduction in performance would disincentive any purchases by miners due to the massive reduction in profit they would see using these graphics cards.

This appeared to work for a time but developers of crypto mining software NBMiner and T-Rex have both restored mining performance levels to 70%, with the latter going one step further and achieving close to 100%.

Miners can use T-Rex to circumvent Nvidia’s limiters by diversifying a card’s mining workload into a 30-70 split. This means that they can devote 30% of graphics card’s power to Ethereum and 70% to another cryptocurrency. However, this comes with some caveats, as it’s not possible to do this the other way around, which is unfortunate for crypto miners as Ethereum is a much more profitable coin to mine.

So, while Nvidia’s measures to hold back miners aren’t entirely broken, it’s likely only a matter of time until their defences completely falter. Nonetheless, Ethereum’s move from a proof of work to a proof of stake model may see demand fall for graphics cards. This could also see used GPU markets flood with used graphics cards, similar to events that happened in China earlier this year.