Nvidia’s just launched its Gamescom drivers delivering some interesting catch-up features, including the Radeon Anti-Lag rivaling Ultra-Low Latency Mode, and Integer Scaling. AMD pulled the trigger first on the latency showdown this year when it launched its new Radeon RX 5700 graphics cards, and Intel beat them both to the punch by rolling out the crowd-pleasing Integer Scaling feature to its Gen11 Ice Lake graphics silicon.

Both features have been introduced into Nvidia’s latest Game Ready driver package, but while the Ultra-Low Latency Mode will be accessible to all GeForce GPUs, the Integer Scaling tech is only possible thanks to the programmable scaling filter of the Turing architecture. And that means only GeForce RTX 20-series or GTX 16-series cards need apply.

Nvidia is also promising an up to 23% performance boost in select games with this update compared to the 431.60 release last month. Apex Legends, Strange Brigade, World War Z, Forza Horizon 4, and Battlefield V are all getting the frame rate hike, with Apex getting the biggest bump of them all.

But it’s that Radeon Anti-Lag-a-like Ultra-Low Latency Mode that you can access via the GeForce Control Panel 3D settings screen that is arguably the most interesting thing to come out of the new drivers.

The feature has three settings: Off, On, and Ultra. When Low Latency Mode is turned off the game engine will take control and will automatically queue up 1 – 3 frames for the maximum render throughput. If you turn it on it will essentially just limit the maximum pre-rendered frames to 1, something you’ve been able to do for years, and something Nvidia pointed to when AMD announced its latest feature. 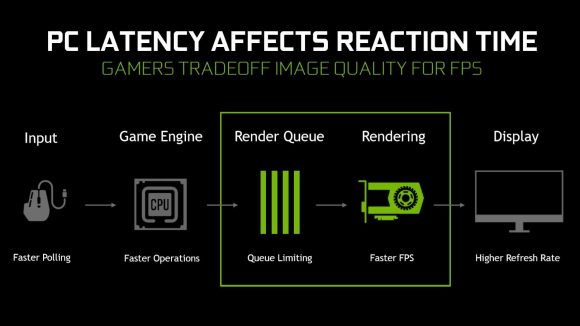 The Ultra setting, however, is designed to operate dynamically and submit the frame just in time for the GPU to grab it and get it rendered. This is the option to use when you’re game’s GPU-bound but you’re still achieving frame rates between 60fps and 100fps and want to get the latency down.

And, in all honesty, that sounds exactly like what AMD is doing with its Radeon Anti-Lag feature. When it was first announced Nvidia came back and said that it had been offering the option to limit the maximum pre-rendered frames to 1 for a decade, but when we spoke to AMD’s Scott Wason he pointed out that seemed to be a misunderstanding on Nvidia’s part.

“What we’re not doing is just setting maximum pre-rendered frames to one,” he said. “And I think that’s their sort of assumption, which is why they were making this ‘more than a decade’ statement. What we’re doing is different, and it is dynamic.

“So what we’re doing actually is looking at the workload as things progress from frame to frame, and then controlling the pace of the CPU work, in order to try to make sure it doesn’t get too far ahead of the GPU work.” 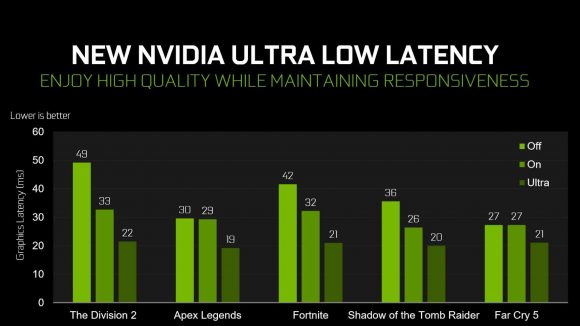 Looks like Nvidia has realised this more dynamic way works and has incorporated it into its own software stack. To great effect too, as its figures for The Division 2 – a game AMD was using as a model for its feature – sees the latency drop by 55% down to just 22ms. And that’s actually quicker than AMD was promising with its cards using the Radeon Anti-Lag tech, where the RX 5700 XT was showing a 30ms latency. 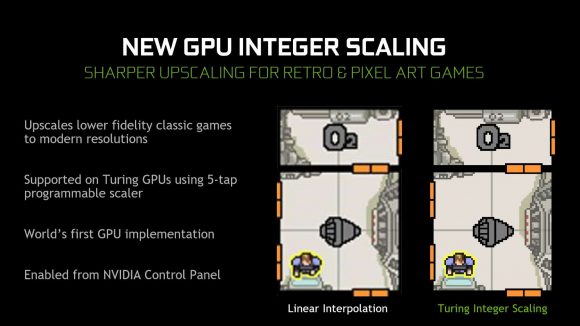 The Integer Scaling feature is something that AMD has yet to implement, but Intel got there first anyway. Though Nvidia will probably take exception to that as it’s only available to Intel’s Gen11 graphics and it’s tough to get hold of Ice Lake laptops running those GPUs yet, and so Nvidia will argue it has actually released the first implementation of the three graphics card manufacturers.

Integer Scaling is something for the retro enthusiasts, and means pixel art games, such as FTL and Starbound, become sharper on higher resolution displays. But it’s a Turing-only feature you can enable in the Control Panel via the Adjust Desktop Size and Position menu.

Join the conversation and let us know what you think about the new Nvidia features via this article’s Facebook and Twitter threads.