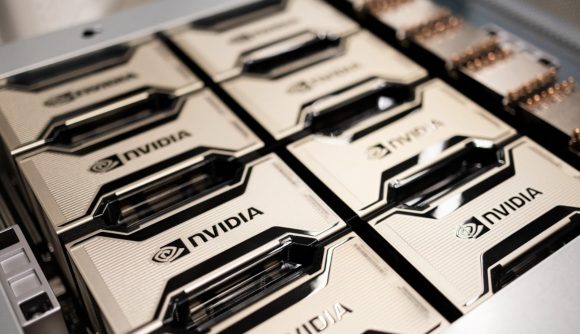 You’d be hard pressed to find a more hotly anticipated hardware release this year than Nvidia’s GeForce RTX 4000 graphics cards, but the company hasn’t yet provided an ETA of when we can expect them to hit store shelves. Thankfully, new information has come to light that narrows down the expected release date of team green’s upcoming Lovelace GPUs.

According to reliable hardware leaker Greymon55, we can expect the RTX 4000 release date to fall sometime in September. This lines up with previous murmurs that suggested we’d see team green’s RTX 4090, RTX 4080, and RTX 4070 by Q3 of this year. There should be plenty of stock to go around too, with Nvidia reportedly spending up to $10 billion USD to secure space on TSMC’s 5nm process node.

However, Nvidia isn’t the only company looking to produce the best graphics card this year. Intel Arc Alchemist and AMD RDNA 3 GPUs will both face off against each other and against Nvidia RTX 4000 cards, as all three companies hope to secure a coveted spot in your gaming PC.

While an RTX 4000 graphics cards will undoubtedly offer top-of-the-line performance, they may need unprecedentedly strong power supplies in order to run their best. In some follow-up tweet, Greymon55 warns that if you buy an RTX 4000 GPU with the AD-102 die, then you should “have a 1500W power supply” on standby, likely equipped with the new PCIe Gen 5 power connector.

Lovelace will be available in September. https://t.co/21gkJrmXLu

Of course, that kind of power draw could be subject to change as Nvidia finalises the designs and drivers of its RTX 4000 graphics cards. For now, we just hope none of the Lovelace lineup will cost as much as the RTX 3090 Ti, wherever it might be.