Professional overclocking is a crazy business, full of liquid nitrogen, testosterone and so much benchmarking. But it’s paid off for FireKillerGR who has set the world record for the highest GPU frequency at a heady 2,885.5MHz with a GTX 1060 from Galax. And I thought I did well nailing over 2.1GHz with our MSI card…

What’s the best graphics card? Well, it just might be Nvidia’s record breaker.

Using one of their shiny white Galax GTX 1060 HOF GOC cards the pro-chip tweaker was able to hit the insane clockspeed, and keep it stable enough to benchmark 3DMark Time Spy, by sloshing a few litres of LN2 over his mighty mini rig. 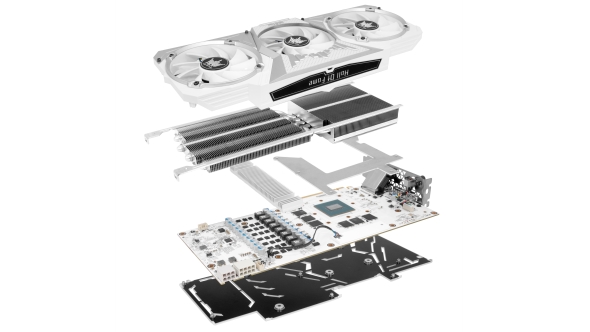 Yeah, he also used a mini-ITX motherboard, with a Core i7 6700K running at 6GHz too, because just overclocking your GPU isn’t mad enough. To be fair FireKillerGR wasn’t just doing this for the lulz, it was all part of the Galax GOC 2016 Worldwide Qualifier event for the Grand Final in December.

You can just about make out the bare GTX 1060 PCB in between those two ice-encrusted, LN2-filled beakers in the pictures. Realistically it would probably be tough to run that rig day-to-day just to play Dishonored 2, keeping the recepticles filled with liquid nitrogen would be a full-time job on its own. 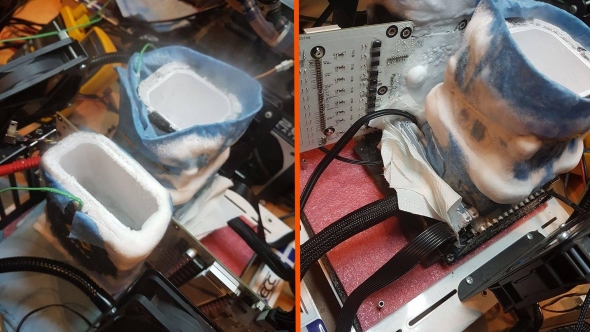 But despite nailing the GPU world record ol’ FireKillerGR is still only 4th on the current leaderboard having had a nightmare on the SuperPi stage.

It’s a day for records…among other things…because a medium sized mammal has broken the existing 3DMark Fire Strike Ultra and Time Spy world records. To be fair he does have a monster rig, so if anyone was going to stand a chance someone with a love of LN2 and a penchant for overclocking was always going to have a shot when they’re rocking a ten-core i7 6950X running at 5GHz and FOUR TITAN X cards. 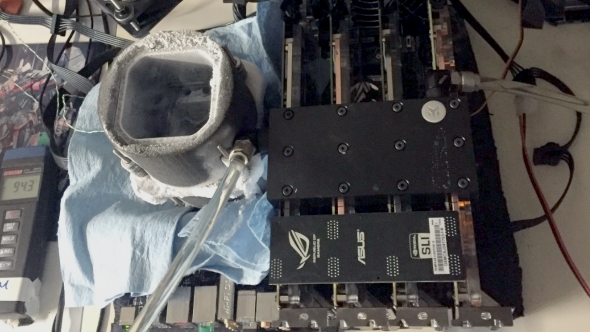 Racoon, for that is his name, has racked up a Fire Strike score of 26,498 and a Time Spy score of 26,504 marks. It might be a while before we see that record tumble.