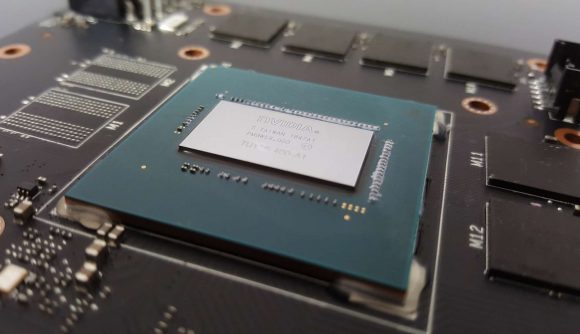 Nvidia is reportedly gearing up to launch the GTX 1650 Ti on October 22 according to the latest insider information. The rumoured graphics card is ostensibly set to replace the GTX 1050 Ti, and will sit in the tight gap between the GTX 1650 and GTX 1660 as an alternative to AMD’s mainstream and budget lineup.

According to new information from Chinese tech site ITHome, the GTX 1650 Ti will launch at the end of next month for 1,100¥, which roughly translates into $155. With the GTX 1650 currently sitting at $150 and the GTX 1660 at $220, we’d suspect the MSRP of the GTX 1650 Ti to actually run a little pricier than the converted cost above – otherwise Nvidia runs the risk of cannibalising its partners’ OC GTX 1650 GPUs.

Whether the GTX 1650 Ti will utilise the full-fat TU117 GPU from the GTX 1650 or the TU116 GPU from the GTX 1660/Ti is not yet known. However, it’s suspected that Nvidia will be targeting performance in line with yet unannounced Navi-based entry-level and mainstream GPUs from the red team, currently dubbed the RX 5600 series.

What is the Nvidia GTX 1650 Ti release date?

With the latest rumours indicating Nvidia will release the GTX 1650 Ti on October 22, it does suggest the GTX 1660 Super and AMD RX 5600 cards may not be far behind. While still only rumours at this point, all signs point towards an entry-level and mainstream showdown between Nvidia and AMD before the year’s out. Both companies will be vying to out-price the other to claim the affordable GPU market – and that’s going to be great for the consumer whichever way it shakes out.