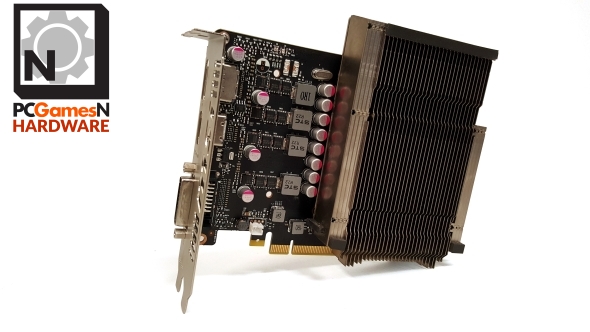 I mean, it didn’t work particularly well, and without a case fan aimed directly at it we were going to end up with either some melty silicon or a machine which doubles up as a storage heater, but the precedent was set.

What’s the best GPU around right now? Check out our guide to the top graphics cards of today.

The point is our passively-cooled GTX 1050 Ti (mostly) worked and somehow Palit must’ve got wind of our covert efforts because the Taiwanese manufacturers have now announced their own version.

The Palit GTX 1050 Ti KalmX admittedly has a more effective heatsink attached to it than my jury-rigged effort and probably looks better too, but that’s for you to judge. Specs-wise though they’re pretty close, in fact the PCGN version runs at a higher clock.

To all intents and purposes though the KalmX is identical to a standard, reference GTX 1050 Ti. It has the same GP107 GPU inside it and the same 4GB GDDR5 memory attached to it. Palit have also given it the same stock clockspeeds too, with a base of 1,290MHz and a boost clock of 1,392MHz. 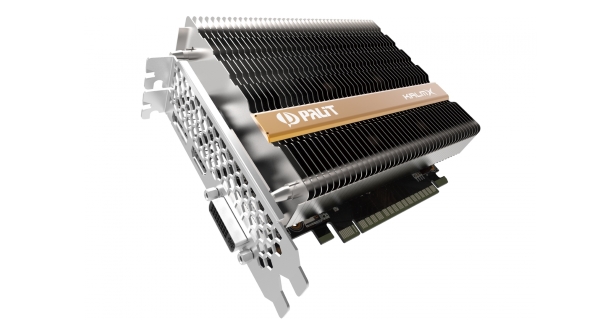 With all that the GTX 1050 Ti KalmX will deliver decent 1080p gaming performance at 0dB. Silently. Noiselessly. Stealthily. For a living room or bedroom PC that’s perfect, though if you’ve already got a powerful PC on your network I’m still saying the Nvidia Shield streamer makes both of those kinds of machine redundant.

That’s all well and good, but my passively-cooled PCGNTX 1050 Ti was built out of a mildly-overclocked MSI GTX 1050 Ti so it’s already quicker out of the box. Unfortunately I didn’t have any really chunky heatsinks lying around with which to replace the insufficiently-chilled base cooler.

I did test the original MSI heatsink on its own without the attached GPU fan. I wouldn’t suggest you do the same. I called time when there was a high-pitched squeal from the card and the temperature gauge read 99°C. The quick-thinking guy I am figured that was a bad thing and pulled the plug. 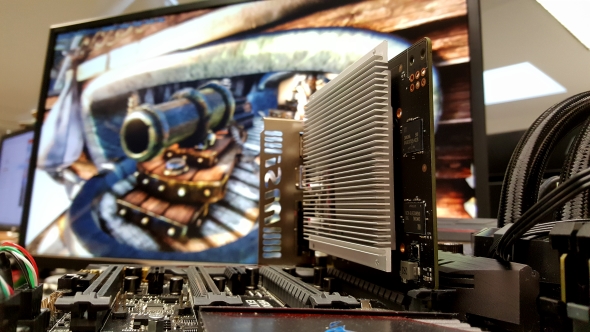 What I did have sat in the patent-pending ‘Dave’s box o’ crap’ under my desk though was an old GTX Titan which I’d somehow blown up while upgrading an SLI machine of mine. Through definitely no fault of my own. Its vapour chamber chip-chiller isn’t exactly massive, or designed for this purpose, but it fits the GTX 1050 Ti’s PCB and gives a better account of itself than the standard heatsink.

And with it in place the card booted first time. Though admittedly it did seem to struggle on our open test bench. On initial benchmarking it started out running the GPU at 1,721MHz then 1,708MHz then 1,670MHz then 1,620MHz. It eventually levelled out at 1,341MHz though the temperature did seem to keep on creeping upwards…

I eventually called time on the Heaven benchmark as the GPU tipped the 90°C point and started glowing a hazy rouge.

It was then I realised I wasn’t giving my passively-cooled card a chance. On an open test rig there’s none of the airflow you get with a standard PC chassis. So I hooked up a 120mm case fan to the test bench, roughly where you’d find it on a normal chassis, and started testing again. I mean, that’s totally scientific and absolutely accurate, right? 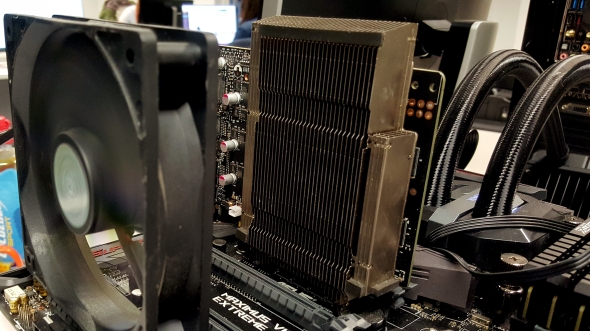 With the fan in place, rotating slowly enough to be essentially silent itself, the shifting air over the Titan-esque heatsink made a massive difference to the temperature of the beleaguered GP107 silicon at the heart of my card. Starting up the benchmark again the card quickly ramped up to 96°C before I turned on the case fan, at which point it rapidly dropped down to 55°C under full load.

With that little extra ‘chassis’ chilling fan my passively-cooled PCGNTX 1050 Ti eventually levelled out to running its chip at 1,430MHz (higher than the Palit’s rated boost clockspeed) and with an under-load temperature of just 52°C. Okay, so maybe we might struggle to get our card to market under those terms (warning: card will melt if you don’t point a fan at it) which I suppose is where Palit’s KalmX comes in.

I guess the real story here is that we already know how well a passively-cooled GTX 1050 Ti can game so if Palit’s KalmX turns up with a hefty price premium over a stock card you know what to do. Rip off the cooler on your standard GTX 1050 Ti and jury-rig something else into its place. Preferably, y’know, a betterheatsinkthan ours.