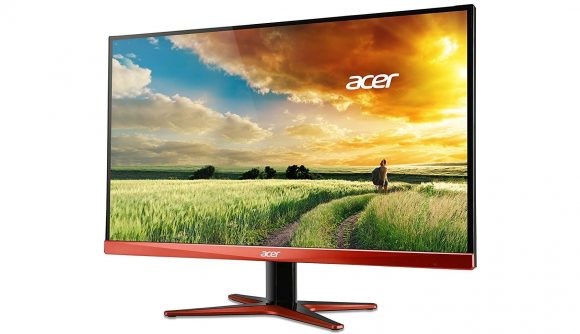 Six years after the introduction of the hardware-based G-Sync technology Nvidia has announced it’s opening up its graphics cards to adaptive sync monitors which support Variable Refresh Rates. Essentially, Nvidia is going to allow a G-Sync Lite experience, without the expensive dedicated G-Sync hardware, for a host of AMD FreeSync-compatible monitors.

G-Sync Compatible is going to be the term for the Nvidia seal of adaptive sync approval when the company adds Variable Refresh Rate (VRR) support to screens starting later this month.

But what does that all mean? It means that a validated G-Sync Compatible monitor will have been tested to ensure that it meets Nvidia’s standards, and that means the screen will have to be able to enable VRR by default and will operate within a range of at least 2.4:1, or 60Hz to 144Hz, for example. It will also ensure there is no flickering, blanking, or artifacting while VRR is enabled. At the moment only 12 adaptive sync monitors have been validated as G-Sync Compatible, and driver support for the VRR G-Sync feature will kick off on January 15, along with support for the new RTX 2060 graphics card.

There have been calls for Nvidia to offer support for adaptive sync monitors within its G-Sync ecosystem for some time… in fact since AMD first proved that getting a smooth, tear-free gaming experience was possible without dedicated in-monitor hardware by introducing us to FreeSync.

Nvidia’s justification for previously not supporting adaptive sync screens is that the wide range of monitors that had the VRR feature meant it didn’t think the quality of the experience was the same across the board. 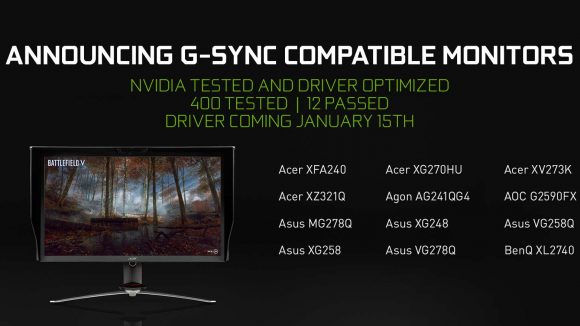 “Not all monitors go through a formal certification process,” says Andrew Burnes on Nvidia.com, “display panel quality varies, and there may be other issues that prevent gamers from receiving a noticeably-improved experience.”

He also states that VRR sometimes only operates within a very restricted range of frame rates, and given that your fps can vary considerably during gameplay that added to an experience that wasn’t necessarily ideal. By doing its own validation on adaptive sync panels Nvidia is promising the G-Sync Compatible screens will offer a reliable experience.

Read more: Check out the best gaming monitors around today

It’s worth pointing out that Intel has stated that its Xe graphics cards will support adaptive sync from the get-go, which must have added a little extra pressure for Nvidia to flick the switch and allow its cards to support the standard too.

So far Nvidia has tested 400 screens and only 12 have been certified as G-Sync Compatible, which isn’t a great strike rate, but you can test your own adaptive sync screen to see how it fares once the new January 15 driver is released. There will be a new option added to the Nvidia Control so you can try VRR out yourself.

“It may work, it may work partly, or it may not work at all,” says Burnes. 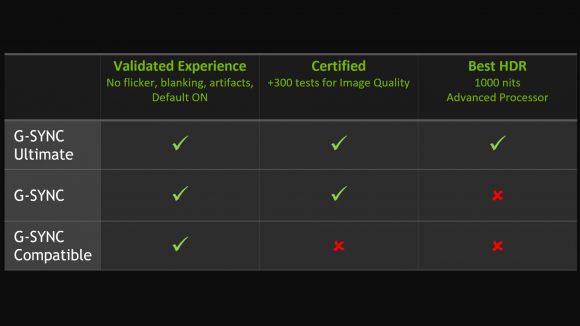 In addition to G-Sync Compatible screens, and standard G-Sync displays, Nvidia is also adding a new tier called G-Sync Ultimate. This will denote monitors that have passed a barrage of over 300 compatibility and quality tests and feature full matrix backlighting, HDR support, and peak luminance of at least 1,000cd/m2.

In other words, it needed a way to try and make its Big F***** Gaming Displays seem even more luxurious than their 65-inch screen real estate could manage on its own. 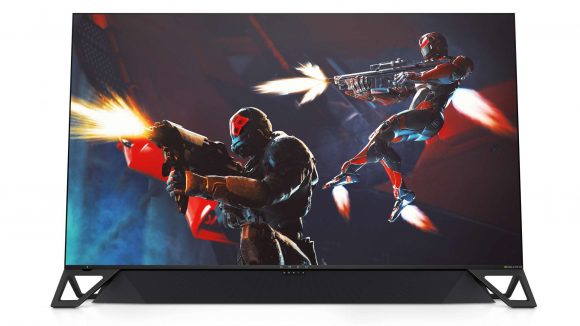 The BFGD screens will finally start to appear in February when HP Omen unleashes its Omen X 65, with 120Hz refresh rate, integrated Shield, and 1,000cd/m2 of peak luminance.

And definitely a horrifically prohibitive price tag too.