Nvidia increased its market share dominance over AMD in the final quarter of 2018, a quarterly report states. The end of last year saw Nvidia launch its high-end RTX Turing 20-series graphics cards, but despite their helping hand in gaining market share over its red corner rivals, overall graphics card shipments were unseasonably down 10.7%.

Over $2.8bn worth of graphics cards shipped last quarter, just a portion of the $17bn worth of GPUs shipped throughout 2018 according to market research firm, Jon Peddie Research. However, despite Nvidia’s best efforts with the RTX 2080 Ti and RTX 2080 releases in the run up to Q4, shortly followed by the RTX 2070 in October, the quarter was down.

“The fourth quarter is normally flat to up seasonally, “ Dr. John Peddie, president of Jon Peddie Research, says. “However, this quarter we found that AIB shipments decreased from the last quarter by 10.7%, which is which is below the ten-year average of a 2.3% decrease. This has largely been attributed to the hangover of the crypto-mining gold rush.”

Greatest hits: These are the best graphics cards going

But nevertheless, the sales it did get were enough to further its GPU dominance to 81.2% of the market. AMD trails behind at 18.8%. 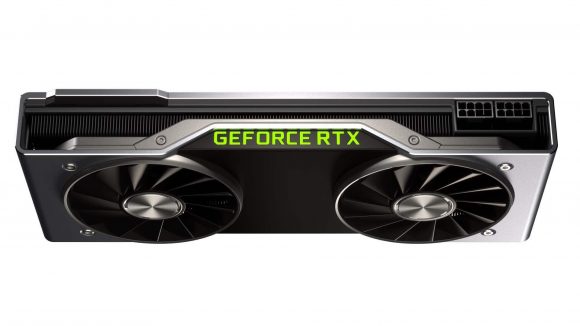 The Steam Hardware Survey for February 2019 still has AMD at 14.68%, however, while Nvidia holds 75.02% of the market. Though Jon Peddie’s report is for add-in cards only, and does not include Intel’s iGPUs as Valve’s survey does. For the record, Intel makes up 10.15% of the systems that participated in the survey.

But AMD is yet to launch its next major graphics card generation: AMD Navi. These 7nm mainstream graphics cards are still on track to launch this year according to AMD’s roadmaps, we just don’t know exactly when that will be. AMD’s RX 580 has been a serious contender in the mainstream market ever since prices normalised after the great cryptocurrency rush of 2017/18, and, with a little 7nm magic, AMD could win back some of that market share once Navi rolls around.