Nvidia’s Q2 2018 revenue increased 40% over Q2 last year. The company just posted its quarterly earnings, which saw the GPU manufacturer hit a total revenue of $3.1 billion. The company also laid out its outlook for Q3, in which it expects to hit $3.25 billion, with absolutely zilch of that quarter’s earnings to come from cryptocurrency miners. What a difference a few months can make.

Nvidia has managed to weather the crypto-crash when it comes to total revenue, but it’s not made it out entirely unscathed. The drop off in crypto trade was sudden and pretty severe, with Nvidia reporting in its Q2 earnings that OEM revenue declined by 54% year-on-year and 70% sequentially, with Colette Kress, CFO of Nvidia, attributing that primarily to the drop in crypto to “fairly minimal levels”. 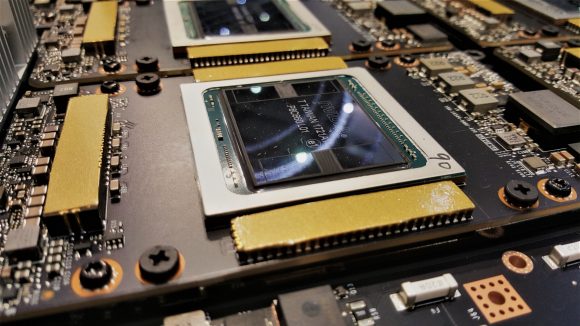 So that really is curtains for crypto, at least for the likes of Nvidia and AMD’s sales surge. The red team similarly survived the crash and is sure to see minimal contributions from mining demand going forward as well.

Interestingly, and despite revenues surpassing last year, the company’s stocks sank quite dramatically after the announcement, largely due to the slowdown in crypto demand and weaker than expected expected results going forward. Nvidia’s stocks are currently 4.8% down at the time of writing.

Nvidia is set to launch its next-gen GeForce graphics card, the RTX 2080, on Monday, August 20. The GeForce Gaming Celebration event in Cologne will be available to watch online, so keep an eye out for that if you want to stay abreast of the latest from the green team. While we don’t have an exact date for the release of Nvidia’s gaming graphics cards, it looks like the tail-end of Q3 and the rest of the year be a pretty profitable time for Nvidia.