March 7, 2019 In an attempt to patch up the Nvidia RTX 2050 leak, Dell has inadvertently leaked another Nvidia mobile graphics card.

OEM giant Dell inadvertently fueled Nvidia RTX 2050 graphics card rumours a few days ago. An eagled-eyed user spotted the entry-level RTX graphics card on a listing for Dell’s G5 15 Gaming Laptop, keeping the entry-level Turing RTX GPU rumour mill turning. Either that or someone over at Dell’s Texas HQ had made a mistake.

Well, it seems the latter was true. Yet, in an attempt to fix the (potential) placeholder reference alluding to the existing of an RTX 2050, Dell has now led on to the existence of a mobile GTX 1660 Ti – which similarly has not been announced by Nvidia.

But that’s not all.  Realising its mistake, Dell has now stripped the listing right back to simply: “The USB C Thunderbolt will be on systems with RTX 2060”.

While we still can’t be 100% sure on Nvidia’s intent, it seems likely that a mobile GTX 1660 Ti will someday soon make it on to the shelves, rather than the so-far mythical RTX 2050.

Top chip: This is the best graphics card going.

Recently the N18E-G0 codename was floated across the web – purported to be an entry-level gaming GPU readying for launch sometime in the near-future. This is speculated to be the mobile version of the desktop Nvidia GTX 1660 Ti, which launched on February 22, 2019.

An RTX branded card lower than the RTX 2060 is unlikely due to the silicon required to get Microsoft’s DirectX Raytracing up to speed. By Nvidia’s own admission the RTX 2060 just about scrapes by the minimum requirements for real-time ray tracing. The RTX 2060 has 30 RT Cores and 240 Tensor Cores crammed inside its 445mm2 real estate and that roughly amounts to 5 Giga Rays/s of ray traced performance. 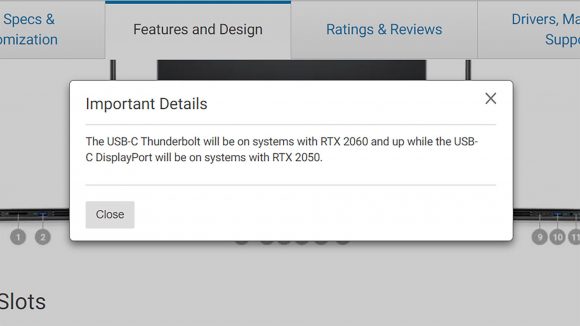 With each RT Core tied to the count of SMs, lowering the CUDA count intrinsically lowers a GPU’s potential ray tracing performance. Or at least that’s how the green team has divvied up the GPU in its current 20-series lineup so far.

There would also be a high price to pay for even marginal RTX functionality, too. The large die size of the Turing GPU has been proven too great a hurdle to overcome at the price-conscious entry-level. That’s where smaller GPUs, such as the 284mm2 GPU within the GTX 1660 Ti, shine brighter.