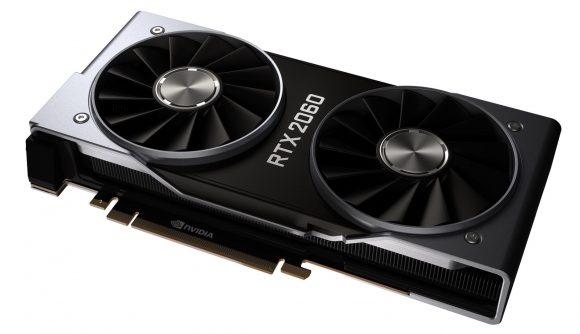 Nvidia’s CEO Jen-Hsun Huang has taken to the stage at CES to announce the RTX 2060. This mainstream graphics card will launch at $349 (£329), and will be available from January 15. Fitted with 30 SMs of TU106 GPU goodness, not only is the CUDA Core count whacked up to 1,920, this card has enough RT Cores and inference-driving Tensor Cores to trace rays in real-time.

Look, just act surprised and we’ll pretend that all of this wasn’t leaked in detail over the last few weeks. Despite an oversupply narrative from the green team these last few months, Nvidia has gone ahead with the launch of its ‘mainstream’ Turing card. Although with a price tag some $100 more than its GTX 1060 predecessor, it’s not going to encroach on the bang-for-your-buck card’s turf just yet.

Also unlike its Turing compadres, the RTX 2060 Founders Edition will not be factory overclocked. Rather this card will run at stock speeds. However, board partners will be weapons-free to launch their own factory OC cards immediately.

Round up: Get the best graphics card ‘ere

With 6GB of GDDR6 connected to a 192-bit memory bus, the RTX 2060 has plenty of memory bandwidth to play with: all in all totally 336GB/s. Unsurprisingly, Nvidia has nerfed NVLink support, no surprises there, yet has retained the same cooler shroud design as the card’s larger Turing siblings. 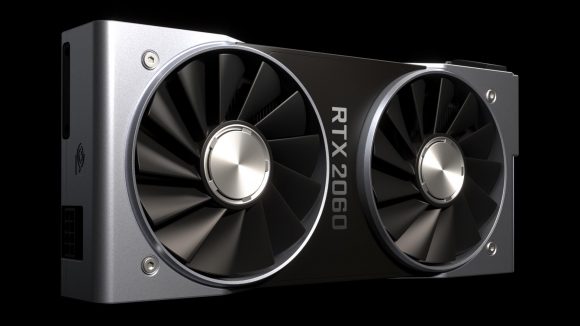 The card is rated to a TDP spec of 160W, considerably more than the GTX 1060 and only 15W shy of the fully-fledged RTX 2070’s wattage. With only a minimal trim to the mammoth 445mm2 TU106 GPU within, that’s none too surprising. That is also slightly higher than the TDP of the CUDA-equivalent GTX 1070.

The green team also reckon all that RTX silicon will be capable of some degree of real-time ray tracing, potentially helped along in the single game with DXR support, Battlefield 5, by the inclusion of DLSS. Support for Deep Learning Super Sampling will be added in-game with the next driver update at launch, alongside G-Sync compatibility for adaptive sync displays.

Huang also announced a whole heap of Turing-equipped laptops on the way – more than forty supposedly – and a launch date for the BFGDs, the green team’s really Big Format Gaming Displays that were the talk of the town this time last year.