Nvidia’s RTX 3050 Ti is now a very real product, appearing in gaming laptops alongside its entry-level RTX 3050. We could still see the budget graphics cards appear in desktops, however, slotting just under the RTX 3060 in terms of price and performance.

The desktop 3050 Ti was originally spotted along with a non-Ti variant on the specs sheet for a prebuilt Lenovo gaming PC back in January, featuring a higher VRAM count than its mobile counterpart. Additional rumours have since filled us in with the potential specs associated with the RTX 3050 desktop range

The previous Turing generation only went as low as an RTX 2060, so this would be the first 50-named Nvidia GPU since the GTX 1650 and 1650 Super, more than likely bringing with it hardware-accelerated ray tracing capabilities. The RTX 3060 is currently the cheapest Ampere card available on desktop, although when considering price to performance, the RTX 3060 Ti is still the best graphics card for a budget PC build – not that you can get either one right now thanks to scalpers.

Here’s everything you need to know about the RTX 3050 Ti.

With zero confirmation from Nvidia on the desktop version’s existence so far, it’s hard to gauge a release date. Rumours were ramping up ahead of May, suggesting it will release at some point this year, but we haven’t seen much about the elusive GPU since the mobile versions landed.

With the 3060 having an MSRP of $329, you can expect the 3050 Ti to have a price tag somewhere below $300. If current stock issues continue though, the 3050 Ti will likely be resold for much more than its announced MSRP. Being a budget card, it’s likely demand will be even higher than it is for high-end cards like the RTX 3080.

Of course, when it comes to modern laptop spec GPUs, this is a trend we’ve seen a few times already, with laptops including an 8GB RTX 3080 instead of the 10GB desktop variant, and a 6GB RTX 3060 rather than its 12GB counterpart. Things can easily change during development, however, as recent rumours claim the unreleased RTX 3080 Ti has dropped from 20GB of VRAM to 12GB.

It’s also worth noting that the desktop RTX 3050 allegedly has a 90W TGP, meaning you likely won’t be able to power it using just a PCIe slot. So, if you’re thinking of using Nvidia’s low-profile card in a specific rig, you might want to consider accommodating additional power connectors. 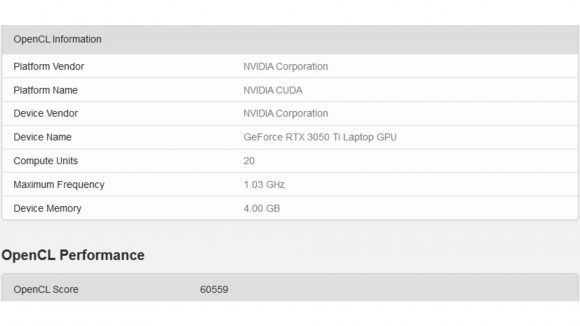 Initial clues about the GPU’s performance from leaked Geekbench scores are promising – The mobile variant of the RTX 3050 Ti has an OpenCL score of 60,559, which is similar to an RTX 2060 Max-Q, while being a 52.6% improvement over the average score of the GTX 1650 Ti Max-Q. We can expect similar performance improvements for any desktop variant of the card, too.