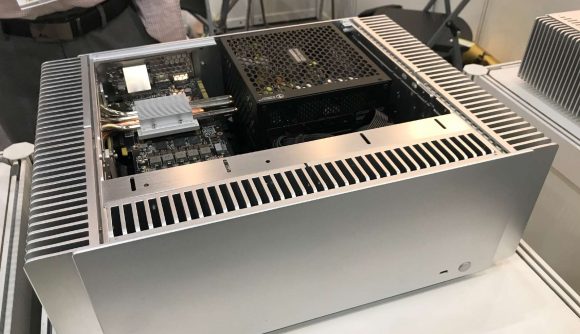 Provided you can get your hands on one, Nvidia’s RTX 3080 is one of the best graphics cards on the market right now. With its hungry 320W power draw, a pretty hefty cooling solution, such as the one on the Founders’ Edition card, is needed to keep the powerhouse chip running cool.

We’ve seen fanless gaming GPUs before, such as Palit’s silent GTX 1650, but Turemetal – which produces cases designed for completely fanless and silent cooling – has now taken it a step further. The company’s founder Mical Wong posted images of a fanless RTX 3080 and Ryzen 5 5600X inside Turemetal’s UP10 case on Twitter (via FanlessTech).

It’s a pretty impressive feat to have this beast of a card running in complete silence, but it doesn’t look sustainable. As you can see in the Twitter photo, the 3080’s GPU temperature rises to 87°C just four minutes into a FurMark GPU stress test, making this setup a surefire recipe for causing thermal throttling.

It’s probably not something we’d recommend you try at home, especially since the specially designed case costs almost $900. Trying to run a fanless 3080 in your own PC case would probably be a disaster. Also, Wong’s room temperature during this test was just 13.6°C, which would’ve certainly helped to keep the card cool, but isn’t really comfortable for gaming. Or living.

However, Wong /was/ running the 3080 at its standard clock speeds. With a bit of underclocking, it isn’t necessarily out of the question to run a fanless RTX 3080 stably – though the RTX 3070, with 100W less power draw, might be a better choice.

But for now, we think we’ll stick to fan-cooled CPUs and graphics cards in the best gaming PC build – besides, the fans on some of the best CPU coolers are virtually inaudible nowadays.